“Modern Problems Require Modern Solutions” is an image-based reaction meme. The meme consists of a still from the scene in Chappelle's Show where Chappelle uses the line, and is generally captioned with the quotation. Usage of the reaction began in December 2018, after its original posting on December 5th.

The image was first posted on /r/dankmemes by Reddit user imthatguy25, along with the quote "When you didn't want to have kids but it's too late for an abortion so you decide to just not get em vaccinated".

The reaction image still came from a skit in the first episode of the second season of Chappelle's Show. This episode originally aired in 2004, on January 21st.

Generally this still and its related quote are used as the punchline to an opening problem and a joking, nonsensical, or extreme solution. When used seriously, the reaction tends to imply an out of the box solution, or coming up with a first world solution to a "first world problem." The meme's standard format was established by imthatguy25's image. It consists of a white block section containing the "problem" at the top of the image, followed by the reaction still.

Quotes tend to include references to current topics, such as Fortnite and Avengers: Infinity War, and the reaction still has been used as a component piece for meme combinations. Like most other memes, "Modern Problems Require Modern Solutions" has also been recolored and redrawn, the first as part of a Thanos joke and the second to avoid being banned by Article 13. 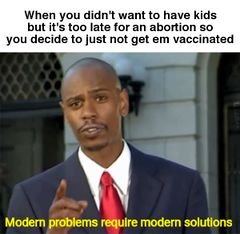 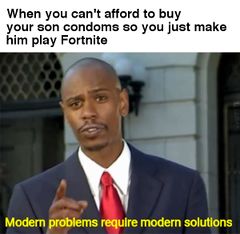 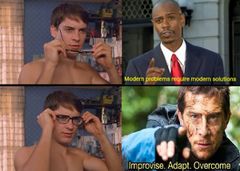 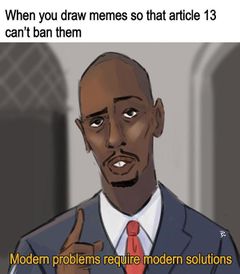