My Name is Giovanni Giorgio 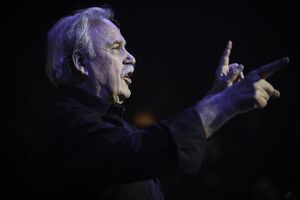 “My Name is Giovanni Giorgio” is a YouTube meme that usually consists of videos which combine the audio introduction to Daft Punk’s “Giorgio By Moroder” to different video clips. Some of these memes pair the song with unrelated music videos or clips of people dancing. More esoteric versions pair the audio with nonsensical situations or crossovers with other memes.

The meme is associated with the iconic phrase “My name is Giovanni Giorgio, but everyone calls me Giorgio”. Most iterations of the meme start with the utterance of this phrase, which precedes the drop of the beat. The beat accompanies a change in the video.

The meme has become recognized by the YouTube algorithm. Viewing one of these videos will certainly result in the suggestion of more. YouTube users have created playlists of Giovanni Giorgio remix videos.

Giovanni Giorgio Moroder is a musician from Italy. His work with synthesizers makes him one of the early adopters of the technology. He is thus considered one of the founding figures of electronic music. You can learn more about him from Wikipedia or Inckredible. He is a very influential person in music, but he is not very well known by the general public. This has caused some to speculate he is part of the secret illuminati of the music business, alongside British 80’s pop duo The Quick. See also: Quickposting. Daft Punk pays homage to Giorgio in their 2013 song “Giorgio by Moroder”, which uses a spoken word sample from Moroder as the introduction.

The first remix is believed to be this video which mashes the sound up with visuals from Reuglar Show. It was uploaded by YouTuber CowardlyDog13 on March 9th, 2018. Parodies of the song began to emerge in 2020, with this Winnie Pooh video serving as a notable example.

Search history shows interest following the release of the song, and a resurgence in interest in 2021 as the YouTube memes became popular. As of Summer 2022, the meme is continuing to grow in popularity. However, due to the nature of the format, it has hardly left YouTube. A handful of examples have found their way onto other websites such as Instagram and Facebook thanks to re-shares. Still image versions of the meme do exist, and typically are found on 9gag. There are also merchants selling unlicensed Daft Punk shirts which feature the slogan.

The similarity in names between Giovanni Giorgio and characters from JoJo’s Bizarre Adventure has caused the fandom to take an interest in the meme. This is the source of many image and video variants of the meme.

The meme doesn’t really have any meaning. It began as an exercise in video editing to create an audiovisual experience. Over time, it devolved into more and more nonsensical remakes. Many of these videos can be described as LOLrandom. Common splices include videos of people or animals in motion. See also: Daft Punk, JoJo’s Bizarre Adventure