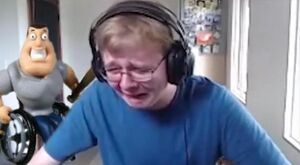 “CallMeCarson Crying” is a popular meme that recently started to make its rounds across the Internet. It contains Family Guy's Joe Swanson and YouTube and livestreaming personality CallMeCarson.

CallMeCarson is the online identity of Carson King, a 20-year-old American male who makes YouTube videos and regularly puts on live streams, both of which are almost entirely made with the intention of making viewers laugh. On June 24, 2019, King was streaming himself playing Minecraft on Twitch when he fell to his death, immediately after which CallMeCarson started to fake cry.

Someone took a screenshot of King at that very moment. Reddit user u/Im_expl0sive submitted the image macro, which - unlike the original version of the screenshot - placed an action figure of Joe Swanson, the paraplegic character from Family Guy, directly next to the streamer.

Joe Swanson serves as the object to which the names or general labels of retail workers or other people who are trying to do the best that they possibly can. Meme creators then place a label on King that details someone who shouldn't be crying.

For example, the original meme refers to a woman, likely middle-aged, who goes shopping and makes the cashier who checks Karen out feel bad for no good reason.