Never Ask A Woman Her Age 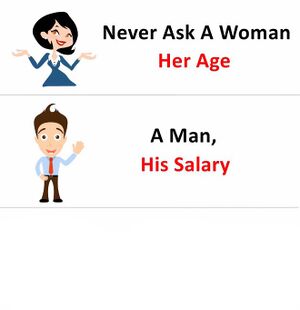 “Never Ask A Woman Her Age”

The exploitable template called “Never Ask A Woman Her Age,” also known as “All Three Are Going to Lie...,” shows that people believe in the inevitability of someone lying about certain topics.

The meme starts with "Never ask a woman her age, a man his salary..." followed by a third humorous statement that refers to a scenario in which most people are more likely to lie, such as a student about their grades, a weightlifter about the amount they can lift or a politician about a crime.

The image depicts three panels arranged vertically with a picture of each subject and associated text. Typically, the part a person might lie about is highlighted with red or another bold color.

"Never Ask a Woman Her Age" first spread on Facebook and then other sites with high sharing in 2019 (reddit) followed by 2022 (Instagram and Twitter). It's origin is credited to Jadoo ki Jhappi who posted it on Facebook using characters from Rage Comics on February 20, 2013, with "...and a student his percentage" as the third part. Although edited versions have spread prolifically on other social platforms, the original post has only generated 161 shares.

Initially, the spread took off with a share on the Bindass Facebook page from the above resulting in 25,000 shares since April 10, 2013. Several initial Facebook shares have resulted in tens of thousands of shares and the spread of similar edited templates that include different illustrations or photos or the phrase "All three are going to lie to you..." above the panels.

"Never Ask a Woman Her Age" is designed to make someone chuckle about an uncomfortable topic (i.e. age, salary, grades or politics). Some people use it to convince others to learn more about an obscure or hot-button topic. They might also try to use it to convince people to stay away from a topic. As a result, the meme can be considered "bait-and-switch" or "reverse psychology" media. 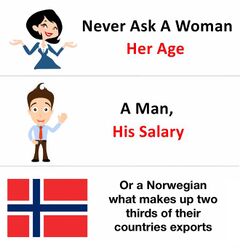 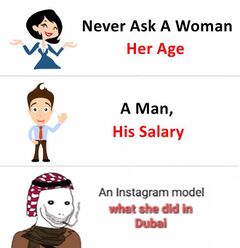 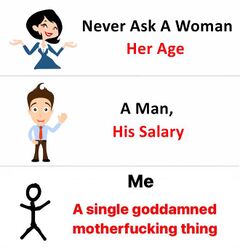 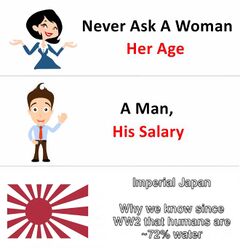