Now This Is an Avengers Level Threat 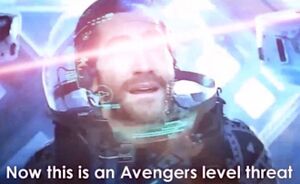 In the case of the Avengers, the Marvel Studios film franchise that as of mid-2019 had already spawned 22 movies all relating to the same fictional superhero universe, the memes never seem to stop, and this has a lot to do with the way these cinematic stories are presented.

In order to pay homage to comic books as their original source, quite a few Avengers scenes are overly dramatic, and this in turn results in excellent opportunities for making memes.

"Now This is An Avengers Level Threat" is a meme that is taken from a scene in the 2019 film "Spider-Man: Far From Home."

Mysterio, a disillusioned Hollywood actor who happens to be an excellent special effects coordinator, is the main nemesis of Spider-Man in "Far from Home," and he is played by Jake Gyllenhaal.

This villain's life purpose is to make Spider-Man's life impossible, and he is quite good at it through most of the film; he often taunts the young superhero for his allegiance to the Avengers, hence his sarcastic line "now this is an Avengers-level threat!" when coming face to face with Spider-Man.

"Far from Home" was released in early July 2019, and this particular meme, a single-panel image macro, made its first Reddit appearance a few weeks after.

This is a sarcastic meme that can be used to make fun of exaggerated reactions because Mysterio is an over-the-top character.

Police officers who believe in the farce of racial profiling, for example, may overreact when they see a young African-American man walking down the street and wearing a hooded sweatshirt. 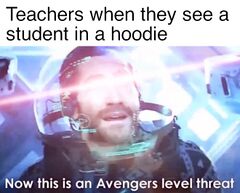 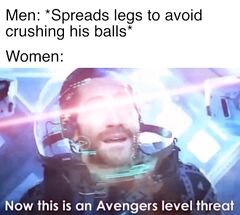 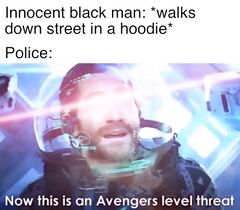 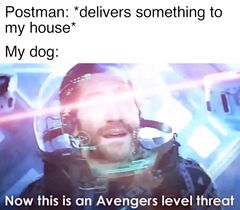