Out of Nowhere Is Spetsnaz 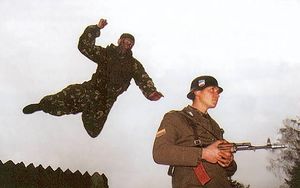 “Out of Nowhere Is Spetsnaz” refers to an image of a Ukrainian solider with a knife leaping towards another soldier from behind during what appears to be a Spetsnaz training exercise. Spetsnaz is translated from Russian to mean "Special Purpose Military Units" and is basically the name for many former Soviet territories' versions of Special Forces not unlike the United States' Navy Seals or Delta Force.

Spetsnatz in general has gained memetic status on the internet as badasses in the mold of Chuck Norris or Jack Bauer. The leaping soldier picture was first sighted on the Soldf message board in 2004 alongside other images from the same exercise of Spetsnaz soldiers doing generally badass things (another image from the same group is of a soldier doing a backflip as he throws a hatchet at a wooden target).

For example, one such image macro shows the leaping soldier as "me" and the unsuspecting target as "kids in fortnite halloween costumes." One of the more popular variations of the meme was posted on Reddit in October of 2018 where the leaping soldier represented "kids watching movies on their ipads" and the target soldier representing "restaurant ambiance." The image generated hundreds of comments and upvoted 95%.

While the original image gained memetic status as an indication of military-style badassery, the image has since evolved into something else. The flying Spetsnaz image has come to present an unsuspecting party (represented by the target soldier) completely unaware of the craziness that is about to befall them (represented by the leaping solider).

The image is not unlike other "unsuspecting victim is about to be attacked" memes like the Henry Cavill/Jason Momoa image from Justice League premiere. 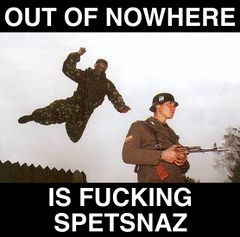 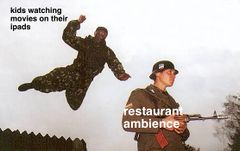 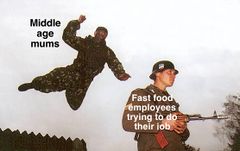 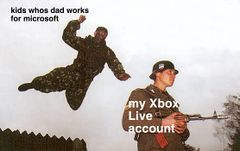