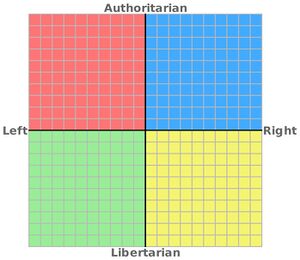 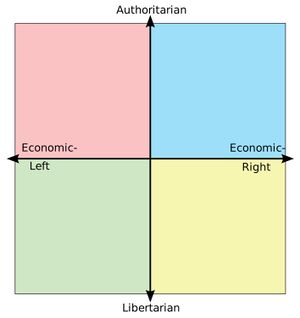 The “Political Compass” is a graph used to visually represent the range of political opinions. It places issues along two axes: economic and social. Economics is measured from left to right (communism to capitalism) and social policy is measured from top to bottom (authoritarian to libertarian). The result is a 4-quadrant chart. The extremes of these quadrants are described as authoritarian-left, authoritarian-right, libertarian-left, and libertarian-right. They are usually represented by the colors red, blue, green, and yellow respectively.

The applications of this as a meme are nearly endless. One convention of Political Compass memes is to zoom in on a single quadrant. Sometimes, a headline that typifies the thinking of a person from said quadrant is placed over the zoomed in graph. It is common to see them quadrants broken down into smaller groups.

Another popular use of the compass is as a “me when”. It starts with a point on the compass marked as the memer’s normal place. When presented with new circumstances, that stance can change, albeit mostly for comedy’s sake. 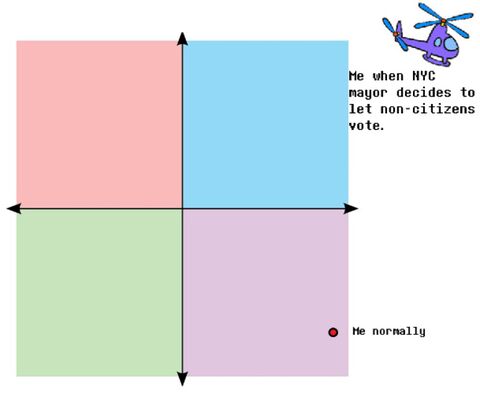 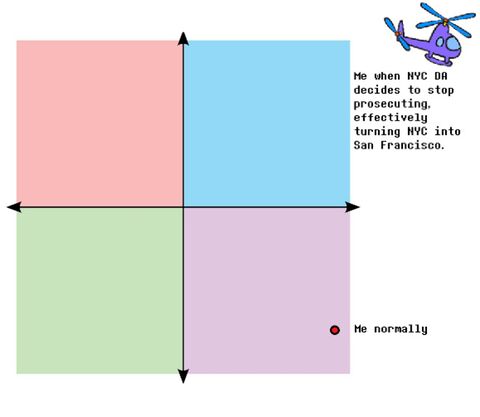 Memers have put some of their favorite characters, living figures, and even music groups in the different quadrants as a rating system. Some have even put different versions of themselves or the same character in different situations.

It is also associated with dad memes, since boomer dads are often closer to the center of this spectrum. They just want to grill and sip monster energy whilst mowing their lawns.

The Political Compass was created in 2001. The organization states that their system is an attempt to accurately describe political thought. They claim (correctly) that certain political terms are not very well understood by most people. The compass aims to separate social issues from being labeled as right or left wing. Party politics has often driven social views towards one or another side, especially in the United States. Therefore, certain policies are associated with right or left wing parties, but holding these values does not necessarily make one a right or left winger. For example, pro-life stances are associated with the right. However, there are people within the libertarian-right who are pro-choice, and there are people who are authoritarian-left who are pro-life. Two people may have the same position on abortion but radically different views on economics and what government’s role should be in the economy.

The developers of the compass have created a test to help people figure out where they stand on the political spectrum. You can take that test here.

The first compass meme is believed to be this example from a Warosu.org thread dated to 8/29/2012. It set in motion some of the conventions that would become pervasive. 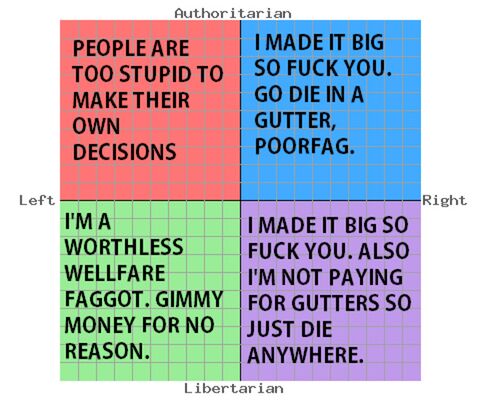 Political Compass memes did not become widely popular until much later. It started to become a mainstay of social media in early 2016.

In the late 2010’s corrected versions of the compass were widely distributed on Instagram and Telegram. These consist of compasses which are blanked out, showing only what the author considers to be valid opinions. This is sometimes associated with an alternative scale that is called the political triangle. This system eschews the libertarian-left, since many people consider leftist economic policies to be inherently authoritarian. This system instead places the three extremes of the triangle as equality (communism), individualism (anarcho-capitalism), and absolutism (monarchism or fascism). 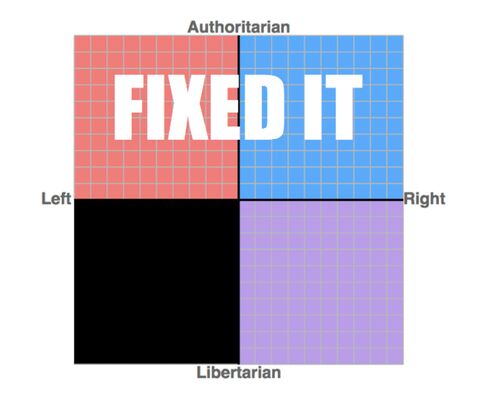 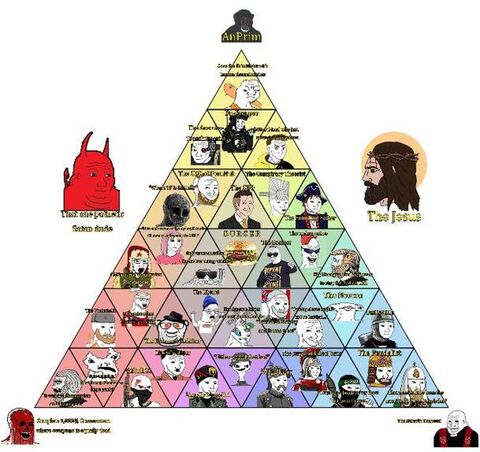 Like it or not, The Political Compass has had a tremendous impact on political discourse, especially on the internet. This is not something universally enjoyed. Some people go as far as to say the compass has ruined political identity. Not all issues fall on two spectrums. The questions in the test can be vague or misleading and some people prefer to self-identify where they fall on the compass. There is no room to give a neutral answer on some of these questions. It has been said that the compass is divisive and biased by some detractors. It is certainly not a perfect system.

Despite these criticisms, The Political Compass remains a popular and often effective way for people to express their political beliefs. Based on its continued popularity, we will not be seeing the end of Political Compass meme trends for quite some time.

As a meme, the compass is what you make of it. Compass memes are usually meant to be ironic and are not to be taken too seriously. However, some people use it to defend their quadrant and attack the others. These people are often the edgelords you will find on politigram or 4chan. Make of their statements what you will. 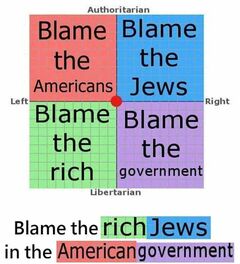 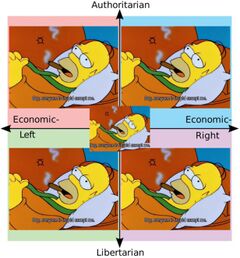 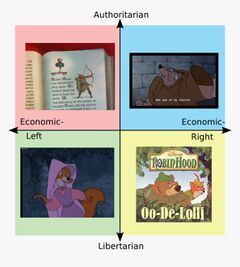 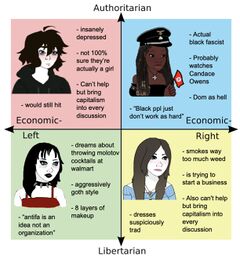