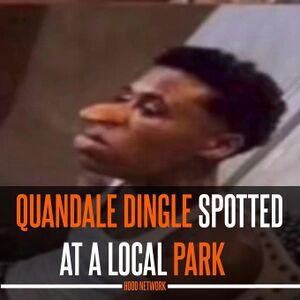 “Quandale Dingle” is a character appearing in a series of memes revolving around his alleged exploits. Quandale and some of his friends and family are pictured as distorted pictures of rapper NBA Youngboy. These photos are edited to give each character comically exaggerated distinguishing features.

Quandale Dingle content follows a canonic timeline. Many of the characters surrounding Quandale are based on real people who have become memes or on characters from other memes entirely. Therefore, Quandale Dingle lore is intertwined with other meme lore – at least to anyone aware of Dingle. Events in the Dingle universe are based on events promised by Dingle in earlier installments.

The meme uses different picture and video formats. Videos are accompanied with a voice to text narration of Dingle’s mischievous escapades. It is also associated with Carmen Winstead, whose audio samples are used alongside the Quandale Dingle lore in such memes.

Other characters in the Dingle lore are usually his friends and family, who accompany him on various large scale and unrealistic activities. It is not consistent with reality, nor internally consistent. For example, Quandale Dingle may have already been killed but he continues to carry out his dastardly plans.

What’s up guys? It’s Quandale Dingle Here. I have been arrested for multiple crimes including: battery on a police officer, grand theft, declaring war on Italy, and public indecency. I will be escaping prison on March 28th. After that, I will take over the world.

Greetings! Quandale Dingle here. My cousin Henry Bartholomew Dinglenut got arrested for putting a TNT in a daycare center, put a camera in Joe Biden’s bathroom and watched him take a poop. My Asian brother Quanlingling Dingle put illegal substances in my ramen and I died.

Ay fellas! It’s Quandale Dingle here. I put percs in Vladimir Putin’s drink and he went to bed for a really long time. I trapped my autistic son’s hand in an air fryer. I dumped boiling water on a prison guard’s head. My goofy ahh friend, Jamarius Quangledangle, tried to eat my ass during Ramadan.

Quandale Dingle official lore: Dingle fans have established a wiki on fandom.com for the ongoing expansion of the Dingle universe which describes him as follows:

“Quandale Dingle is an african-american man aged 20-25, most well-known for various unlikely and even seemingly impossible appearances throughout the entire universe, including virtual spaces.

Another important piece of controversy regarding him is his imprisonment and eventual escape with the help of his friend Juandale Pringle.”

Quandale Dingle’s name comes from that of a high school football player from New Jersey, who was featured in a video on TikTok that went viral. The internet became fixated on the name and it gained almost instant popularity. In September 2021 it gained almost instant recognition across the internet. It has exploded in popularity on TikTok and Instagram, especially among Gen-Z users in the United States. The meme has inspired a number of musical projects. Internet users made spin-off names based on it. This led to the rapid creation of a fictional universe surrounding Quandale and his grandiose plans for world domination.

Dingle’s name caused an overnight sensation in September 2021 after a TikToker posted about seeing his name in a login screen on what appears to be a public computer. It is safe to assume that this user attends the same school and the computer is at the school’s computer lab. Dingle was identified later in a video of one of his football games in November of 2021. By the next day, the memes had already spread to Instagram and Facebook and had generated a lot of responses. By December, it had invaded iFunny where more characters were added to the lore.

TikTok user @fitnessscf is sometimes credited with confirming the real identity of Quandale Dingle. Their shared content suggests that they know each other but it is of questionable authenticity. Hood irony creators are responsible for the creation and spread of Quandale Dingle memes across all social media platforms. The name has become a popular pseudonym for prank callers.

Responses to these images include stories written by users about their own encounters with the characters. Somehow, they are able to be in more than one place as many of these stories eventually contradict each other and even the official lore, but most are accepted by the fandom. To this day, Quandale Dingle has a following on Reddit.

Quandale Dingle’s name sounds funny to English speakers. This inspired an online phenomenon. There is no meaning to the meme itself beyond that. However, Dingle and associated characters have been used in different contexts to evoke different ideas and emotions. Most users describe Quandale Dingle as a goofy ahh meme because of the ironic sounds that are often used with the characters. The memes themselves frequently refer to some of Dingle’s associates as goofy ahh people. 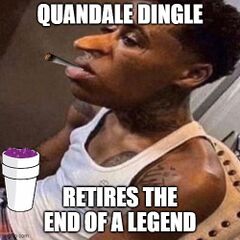 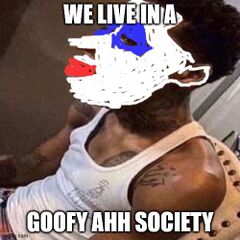