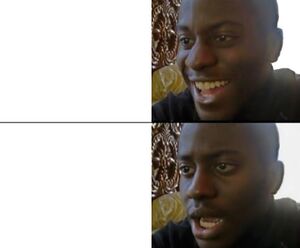 “Disappointed Black Guy” is a meme format which began in 2011 on Tumblr and spread rapidly, seeing several spikes in interest over time. It usually appears as a four-panel story of the expectations and reality of a given situation.

In 2019, the meme began regaining popularity and has seen much attention on Facebook, Instagram and other sharing platforms. At the time of this writing the meme continues to be a mainstay of social media.

In 2021, an internet rumor spread that the disappointed black guy was Brazilian actor Lázaro Ramos. This caused constant annoyance for the actor. The meme’s creator cites it as one of the things that prompted him to go public about his experience as a viral sensation as he did not want other people to be affected negatively by the spread of his likeness.

This template is available for quick edits on Imgflip.

Please note, however, that this format does not use the Impact font. Most text-based versions of this meme stick to plain black text. You may also use images in place of descriptive text.

The meme’s creator, known as Tediferous, uploaded the first iteration in late 2011. He was prompted to create the meme from his own experience on Tumblr. Days before, he had posted a tier list of which characters from Dissidia 012 Final Fantasy were the most fun to battle against. This was based on an inside joke between him and a friend because he hated playing against a character his friend would often use. The post did not get much attention. As such, a day later, Tediferous recounts being excited to open a message about his post, but the message was derogatory regarding his intelligence, playing ability, and ethnicity. This is when Tediferous decided to recreate this historic moment in meme form. It depicts himself looking excited to be receiving a message only to find that it contained just a single slur. It was posted to Tumblr, where the first spinoffs also began to emerge.

Ultimately, Tumblr would remove the original image due to it being a violation of terms of service. This did not stop the meme from spreading around Tumblr and into the broader internet. Spinoffs began to appear within days of the original post.

Tediferous is a digital artist and developer. In an interview with KYM he reveals that strangers, friends, and even teachers have commented on seeing his face in memes online. As we have seen with people like Boxxy, gaining internet fame is not always fun. But like Blake Boston (AKA Scumbag Steve), Tediferous seems to enjoy it and channels it into boosting his career. He also says he enjoys seeing more spinoffs of his image continuing to be created. This is a rare example of someone memeing themselves, gaining traction, and embracing the online persona that comes with it. However, having this status is not without its problems. He states that being introduced as “the meme guy” can be annoying. He also had to remove himself from facebook at one point because too many people he knew would comment about it on images of him, bringing him much unwanted attention.

Tediferous has appeared in a Buzzfeed interview where he goes into his personal history and interests:

Disappointed Black Guy is a meme template based on two reaction images of a man’s face, one showing excitement and the other showing disappointment. The images are usually shown in that order to convey an effect of expectation vs reality being a letdown. Some creators have reversed this and others have duplicated or modified one of the images for their desired effect. It is used similarly to Drake Approves/Disapproves, Kombucha Girl, and other such templates.

Like the name it has been given by the internet, it is usually used online to express disappointment in an experience or the quality of a product. This applies to situations both real and fictional. Sometimes the single images of Tediferous are used as reaction images. 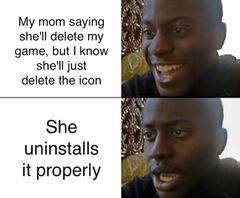 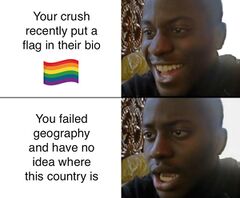 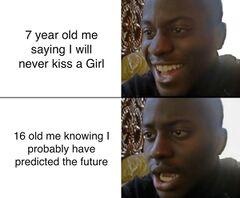 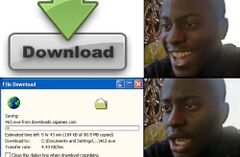