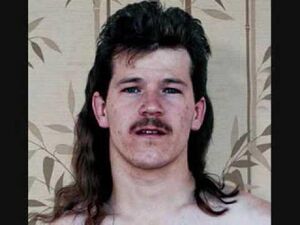 “Rick the Mullet Man”, sometimes called Rick from Independence, was the victim of a series of prank phone calls. Clips from these calls were put into soundboards and used in other prank calls. The character is considered the memetic figurehead of the Kansas City, Missouri area. Rick’s language is laced with profanity and racial slurs. He is sometimes represented by this generic image of a hillbilly, which is shown edited in different outfits and contexts for YouTube videos.

Rick is associated with the Depressed Guy and Drunk Guy soundboards, which originated from the same family of prank calls. Callers took voice samples from one prank call victim and used them to troll others.

On most social media platforms you can find at least one Rick parody account. Here is a notable example from Twitter.

The first Rick the Mullet Man calls are credited to Thegoldenphone2 and posted by Mr88Nismo. In these calls, Rick develops a beef with a character named Frank Garrett, who is in reality just a soundboard of a previous prank call victim. Rick is famous for challenging Frank to come to his home and gives his full address, stating that he will be ready with his AR-15. This led to some of the images of the redneck characters holding AR-15 rifles which appear in subsequent Rick videos.

Rick is also known for calling his opponents “Hoosiers”. This is a sometimes derogatory and sometimes prideful term for residents of Indiana. Apparently, this word is also used in parts of Missouri as a general insult for a stupid or wicked person. This caused a bit of confusion with fans of the soundboard prank calls. Therefore, the term appears frequently in memes and videos about Rick.

It is believed that Rick became aware of his use in the soundboards some time in early 2010. This may be due to his attempts to search for Frank Garret and his dox online. He stopped giving the same reactions and people began to lose interest in calling him. Rick’s soundboard clips continue to see use in prank calls and YouTube remixes to this day, though the meme began to dip in popularity around 2015.

The meme began to make headlines in 2010. Some prank callers had the audacity to call various police departments as Rick. This caught the attention of several departments, most notably that of Houston, Texas and Chillicothe, Missouri.

It has appeared on Fox News more than once, including an incident in which prank callers managed to get a Rick soundboard call on the air. Local news sources have warned Missouri locals of the calls and their potential impact on the community.

Although Rick is portrayed as a stereotypical redneck with a mullet haircut, his actual likeness is unknown. In 2013, YouTuber Billybob James attempted to drive by the address that Rick gave in the prank calls. He did not catch a glimpse of the man himself. It is not known if he even still resides at that address. You can watch that video below.

Other YouTube users have attempted to identify Rick by finding him at one of his local watering holes. This resulted in a prank call using his voice to a Missouri bar.

Rick’s personality reflects a lot of the traits people associate with rednecks. He is quick to anger. His speech is vulgar and sometimes racist. He speaks in a midwestern accent that some people say sounds hillbillyish. Therefore, the internet has made him into a redneck character.

The story of Rick the Mullet Man is a reminder to us all not to take online trolling too seriously. You never know when it could get out of hand. Many of these situations on the internet can escalate, especially when tempers are flaring. Remember that if you are raging at somebody online, they may be recording! You may find yourself featured in a YouTube video for giving the prankster the desired reaction.