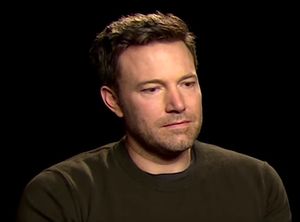 “Sad Affleck” is a meme that refers to the less than stellar reception of DC’s “Batman Vs. Superman: Dawn Of Justice” movie released in 2016. In an interview with co-star Henry Cavill conducted shortly after the film’s release Affleck seemed very sad and lethargic. Speaking very little and smiling even less. Critics of the film and of Ben Affleck ran with the footage and produced various memes based on the image of a dejected Affleck looking at the ground. Since Ben Affleck is usually a little more vocal than this, it was taken by many as a dog whistle that even he didn’t like the movie.

The interview referenced by the meme occurred on March 24, less than a month after the film’s release. It was conducted by Yahoo! UK and can still be found there. The first well-known memes of this interview came from a Youtuber named Sabconth. He played an excerpt from the interview, focusing in on Affleck’s face while playing some sad music right after the interviewer begins talking about the film’s “mixed” reviews. The video flashes to some of the more extreme of these negative reviews. The sad music was “The Sounds Of Silence” by Simon and Garfunkel. The video was a quick hit, garnering more than a million views within 48 hours. This of course led to numerous other people using the footage for memes.

Like all memes, the meaning of this one varies somewhat by the user. Memes are a subtle and many-faceted art form that defy easy categorization. However, this one is generally meant as a criticism of either Ben Affleck or the film “Batman Vs. Superman: Dawn Of Justice”. The film has generally been considered to be a great disappointment. After a record-breaking opening at the box office, the film experienced an 81.2% drop in its second weekend. Many reasons have been cited for its general failure and its incredibly bad reception from critics. Its approval rating on Rotten Tomatoes is just 27%. In general, the use of this meme simply denotes a great dislike either of Affleck or the movie itself. 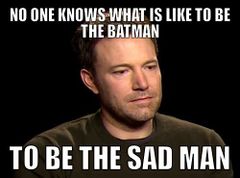 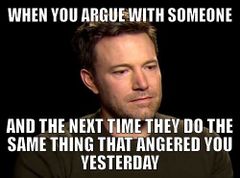 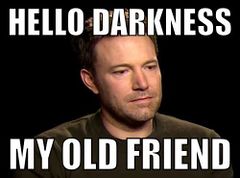 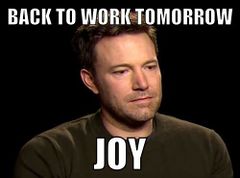