So you have chosen... death. 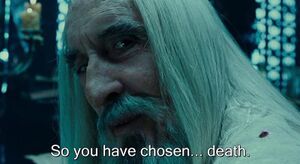 The "Lord of the Rings" film franchise has spawned countless memes ever since its first installment was released in 2001, and we can safely assume that decades will pass before LOTR memes become stale.

When you consider that this trilogy exceeds 680 minutes in digital streaming format, that is a lot of meme-making material.

Even before the meme fountains known as Facebook and Reddit went live, internet forum users were sharing early image macros and animated GIFs featuring the likes of Frodo Baggins, Legolas, Gandalf, and quite a few other LOTR characters, including the unforgettable Saruman the White, masterfully played by the late British actor Sir Christopher Frank Carandini Lee.

The line of dialog itself dates back to 2001; in "The Fellowship of the Ring," Gandalf insists that there can only be a single being who can control the Ring and all of its fantastical power.

Saruman warns Gandalf against turning against the fellowship, and he delivers the "so, you have chosen death" line when Gandalf puts an early end to their argument by mounting a giant eagle and flying away.

This overly dramatic scene has been referenced in online discussion forums since the film was released on DVD, but it started gaining momentum in 2016 on the Tumblr blogging platform; two years later, it started trending on Reddit.

When you get into an argument, you should not underestimate what your opponent can do. You may think that your clever stump line will mark the end of the discussion, but you may end up paying a hefty price for your bravado.

Making an overly dramatic exit such as flying off atop a giant eagle is not always recommended. 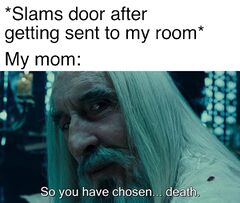 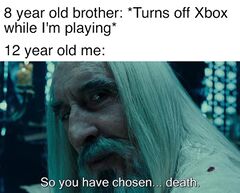 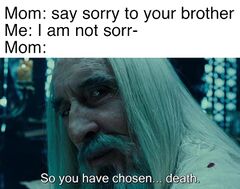 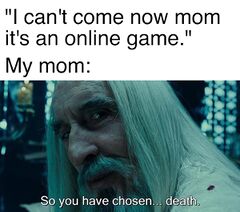