If you've been on the internet for more than two seconds, you might have chanced across a picture of someone, maybe a guy in a blue sweater smugly drinking coffee, maybe some Photoshopped image of something else sitting at a table with a banner that basically says "[PLACE IRONICALLY CONTROVERSIAL OPINION HERE] CHANGE MY MIND."

You've been on the internet for more than two seconds obviously so you know what a meme is but maybe you aren't sure what this particular one is about. Thankfully for you, there are people online who have nothing better to do than to explain this kind of stuff to you.

The blue sweater-clad generic white guy in question is Steven Crowder, a conservative pundit known for firm beliefs that clash against generally liberal conceptions of gender and racial inequality.

In February of 2018, Crowder went to Texas Christian University and set up a table outside that read "MALE PRIVILEGE IS A MYTH CHANGE MY MIND". This is a regular segment on Crowder's YouTube channel, Louder with Crowder, another famous example being over whether Donald Trump is a fascist or not (Crowder says no). The objective obviously would be to get dissenting opinions to challenge his anti-feminist viewpoint. Crowder posted the image on Twitter, almost certainly knowing it'd go viral. It did.

Almost immediately, the internet went about altering the banner to say other things. At first, it focused mostly around mocking Crowder and/or his anti-feminist views (ex: "THE CLITORIS IS A MYTH CHANGE MY MIND" or "GONNA DRINK THIS MUG OF HOT PISS CHANGE MY MIND") but inevitably Crowder would be photoshopped out for the sake of other memetic figures such as Dr. Ian Malcolm LIFE FINDS A WAY CHANGE MY MIND and Thanos (THANOS DID NOTHING WRONG CHANGE MY MIND).

Generally, the "CHANGE MY MIND" viral image has come to represent someone presenting a hotly contested opinion and daring people to make a convincing argument otherwise. Sometimes, it can be a memetic argument like pineapple on a pizza or it can simply be co-opted from another meme such as Tommy Wiseau's "I did not hit her" but the joke generally satirizes holding a solidly non-mainstream opinion such as Crowder's denial of male privilege. 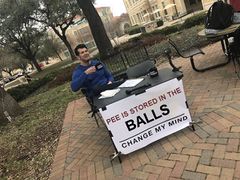 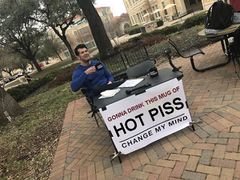 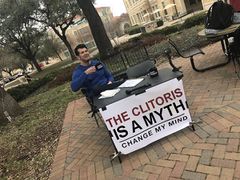 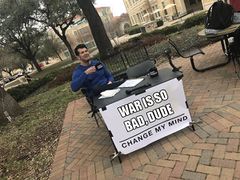