Thanos' «Just Do It» 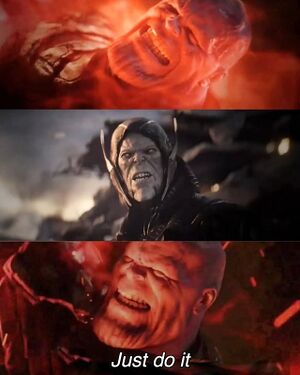 Many of the best of memorable memes emerge from more than one popular culture source. Mashup memes tend to have a strong impact because they fire up various synapses, particularly when they comment on matters related to cultural appropriation.

Thanos' "Just Do It" is a perfect example of how mashup memes originate and evolve in 2019; it borrows a scene from the "Avengers: Endgame" Marvel Comics universe cinematic saga, and it also makes generous use of the iconic "Just Do It" marketing campaign created by sports apparel giant Nike.

It should be noted that the "Just Do It" phrase is often thought to have derived from the "Just Say No" slogan promoted by the late First Lady Nancy Reagan as part of the United States War on Drugs in the 1980s.

It only took a couple of weeks after the release of"Avengers: Endgame" in theaters for Thanos memes to flood Reddit and social media.

"Just Do It" was originally a three-panel exploitable meme in which alien being Thanos, who is convinced that half of humanity must be annihilated, orders another alien to carry out a military attack that would wipe out many combatants, meaning that not even a pyrrhic victory would be achieved. Upon hearing the field commander's reasonable objection, Thanos doubles down and screams to just do it.

Since May 2019, dozens of variations of this meme have appeared.

This is a very literal meme.

When someone in a position of power will not listen to reason, "Just Do It" comes to mind because no one wants to wait around for excuses; nonetheless, there is something else about this meme that goes deeper, and it is related to how Nike handled the political speech rights of former NFL quarterback Colin Kaepernick, whose promising career was scuttled because he dared speak against police brutality and racial profiling.

Nike doubled down on "Just Do It" because Kaepernick lost his career for a noble cause; in the case of Thanos, his decision was neither noble or reasonable, it was simply foolish and disastrous. 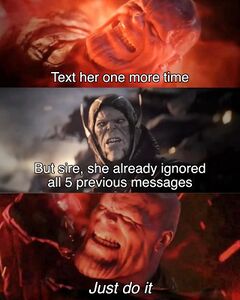 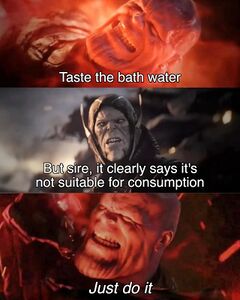 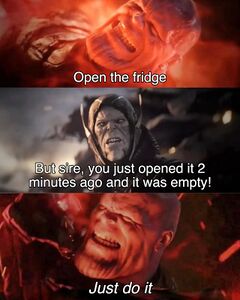 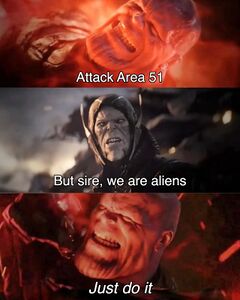