With 22 films in the Marvel Comics' Avengers cinematic universe, quite a few memes have been made from this saga.

Even though "Avengers: Endgame" marks the end of the Thanos and Infinity stone storylines, this does not mean that the meme-making will stop anytime soon.

Thanos, the main antagonist of the final Avengers sequels, is featured in numerous memes, one of the latest being the "Impossible" image macro.

Thanos is a powerful alien from Saturn who happens to be obsessed with death despite being unable to die from natural causes.

Puzzled by the dysfunctional ways of human societies, Thanos believes that global problems can be solved by wiping out half of the world's population, something he accomplishes in the "Avengers: Infinity War" film. In "Avengers: Endgame," surviving superheroes figure out how to undo the genocide and restore order, a feat that involved considerable time travel.

Thanos figures out part of the Avengers plot, but he fails to take into account that time travel may involve multiple timelines. When he finally realizes this, he refuses to believe it; this is when he reacts in overly dramatic fashion and screams: "Impossible!" On Reddit, the first image macros made for this meme appeared in May 2019, a few weeks after the release of "Endgame," and it was related to finding out women can actually enjoy watching pornography.

This is a simple and straightforward reaction meme. For all his pragmatism and nihilism, Thanos should have known better than to ignore multiple timelines.

Humans have a better grasp of time because it is extremely meaningful; Thanos' alien race is eternal and does not have to worry about time.

Whenever an exaggeration is needed to deny something you should have known all along, this meme will be perfect. 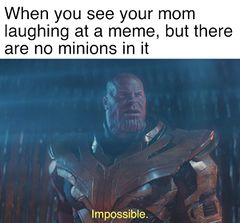 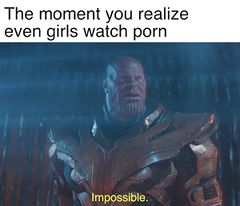 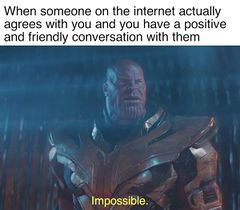 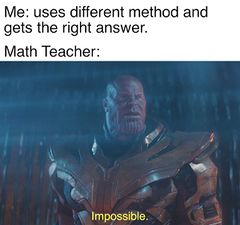