There Is No Queen of England 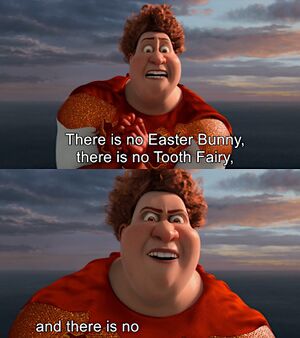 The “There Is No Queen of England” meme is a family of memes consisting of two panels.

In the first panel, a character says, "There is no Easter Bunny, there is no Tooth Fairy..." and in the second panel, he finishes, "and there is no..." with the conclusion supplied by the creator of the meme.

The meme is taken from the 2010 animated movie Megamind.

The superhero-turned-villain Titan (voiced by Jonah Hill) kidnaps reporter Roxanne and tries to convince her to give up her positive views: "You're living in a fantasy. There is no Easter Bunny, there is no Tooth Fairy, and there is no Queen of England. This is the real world, and you need to wake up!"

The humor of the original line is based on Titan's posing as a hard-headed truth-teller, but only managing to reveal his own ignorance in the process. Most of us have had the experience of having someone who doesn't know what they're talking about try to "enlighten" us.

Variations of the meme replace "Queen of England" with other things that people claim don't exist but are actually real. 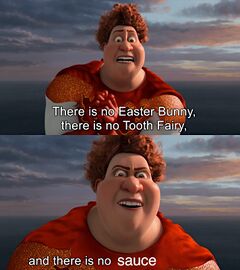 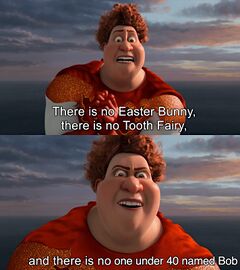 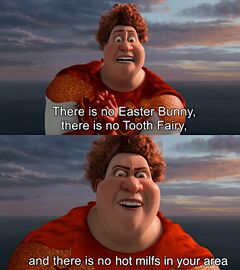