Thomas Had Never Seen Such Bullshit Before 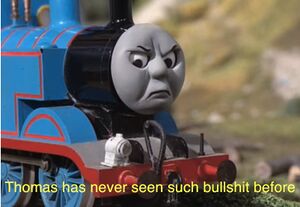 The “Thomas Had Never Seen Such Bullshit Before” meme emerged from a still image of Thomas that was taken from an episode of the popular children's preschool animated series. The online community has been adding captions to the image to express their distaste of current events or actions.

The episode, “Thomas in Trouble”, aired on December 18, 1984 in the UK. In the scene from which the still image is taken, a police officer asks Thomas to halt. His face clearly showed that he was upset by the request that was made. Where the caption 'Thomas Had Never Seen Such Bullshit Before' originated from is still unknown. It seemed to have stepped into the limelight at the start of August 2019 by Tweeter @DocSpaceman_MD.

The still image of an angry Thomas the engine, without the trending caption, has been used by the online population since 2015. It was also listed that year in a group of what were considered the golden standard of macro images. By the end of August 2019 the meme had gained popularity amongst Reddit users. Reddit user Cyberostrich added his own caption, "When you tell a third grader that there are numbers below zero", and received 22,000 upvote points and more than 70 comments within a few weeks.

A couple of days later, Reddit user ShadowRedditer submitted his version of the meme with the caption "When u finish 1st place, but then the teacher says 'u are all winners". This post earned over 80,000 upvote points and over 200 comments from the Reddit community. Its popularity continued to gain momentum into the first week of September 2019. Reddit user ham_salsa posted his version with a caption that reads "When the teacher won't round my 58 to a 94". This submission received over 20,000 upvote points and 100 comments in just a few days.

The captioned still image is used to reflect one's feelings in a comical fashion regarding distasteful actions. 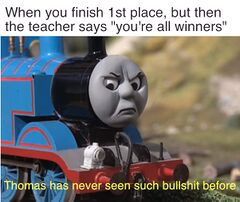 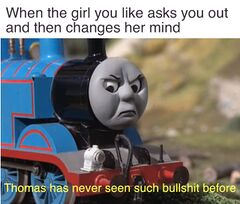 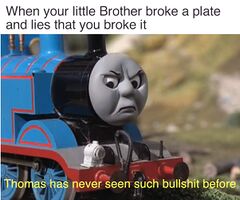 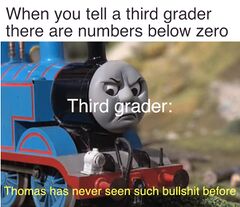