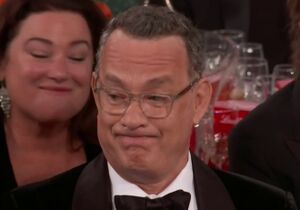 After host Ricky Gervais delivered the opening monologue, poking fun at celebrities and the award show circuit as a whole, the comedian also shamed presenters for making their acceptance speech about politics. Immediately, Hanks was seen and televised with a grimace that internet users found as the perfect shot for a reaction image.

MTV News on Twitter provided the perfect template to make the meme go viral. Shortly after the 2020 Golden Globes broadcast, Twitter users began their own photoshops of Hanks' reaction.

Many referenced his famous role as cowboy Woody in the Toy Story movies, comparing Gervais to character Buzz Lightyear. The reaction image spread rapidly through Reddit, Instagram, and Facebook.

Tom Hanks is known for playing likeable characters in film, including Forrest Gump and Mr. Rogers, as well as a philanthropist for many organizations.

The reaction to Gervais' controversial speech ranged from laughter to Hanks' grimace. Tom Hanks' Golden Globe Grimace is meant to express polite embarrassment during any awkward moment that life has to offer. 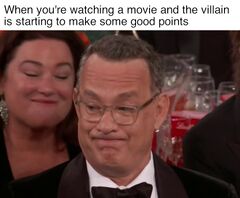 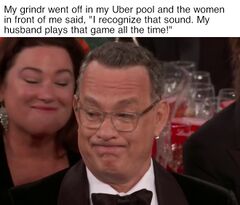 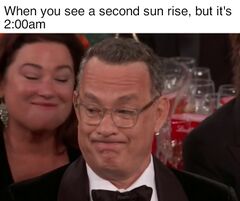 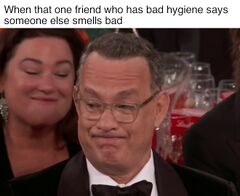