US vs EU devs 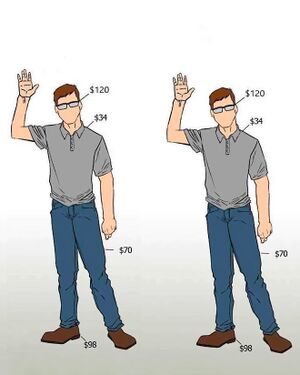 “US vs EU devs” is, as the name implies, a comparison between software developers in the US and Europe. It consists of two characters, typically shown as the same man with priced accessories. The meme format is clearly derivative of webcomic and rich vs poor templates which precede it. It does not conform to the conventions of either. It appears to be OC art from an anonymous artist. In its original context, it can be considered relatable for programmers and software developers.

The meme emerged on the Reddit board r/ProgrammerHumor in June of 2022. The original image was immediately popular and saw many spin-offs within the first week of its posting. These images are available on numerous social and web platforms, most notably facebook. Its popularity has mostly remained within programming circles.

The original author is anonymous and appears to have deleted their account following dissatisfaction with the community response. One thread is written by someone who claims to be the original creator. Another expresses frustration with the format. OP threatens to leave if this format persists. Both have been deleted along with the accounts which posted them. These threads imply the existence of an earlier version of this meme months prior, but there is no evidence to support this idea.

Europe and the Americas are both leading regions for software and tech development. Employers in both zones compete for each other's workers and it is not uncommon for software engineers to move overseas for work. This is a trend that works in both directions. In the world of software developers, the cultural and economic differences between them is often a conversation topic.

The original version of this meme plays on cultural stereotypes about Americans. Many Europeans think of Americans as gun toting flag wavers. There is no difference in the original image between the two devs other than the currency and these classically “American” features. Essentially, it is stating that you are doing the same thing in a different culture. Many young and aspiring programmers wonder which is better, and the author implies it is more or less the same. Throughout time, different memers in the programming world have used this format to give their own takes on the matter. However, many versions of this format present the issue sarcastically or deviate from it entirely. 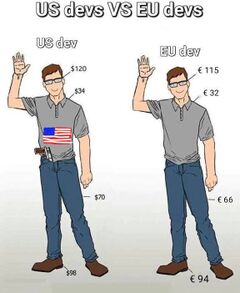 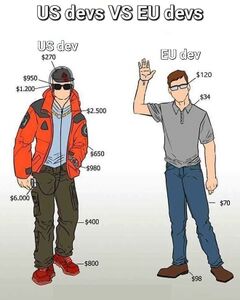 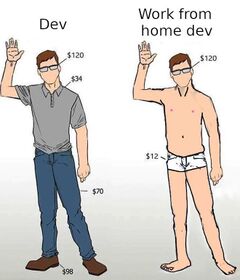 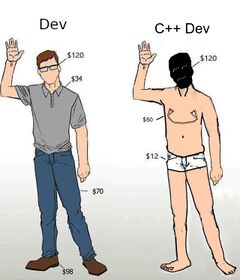