You're weak, I'm you 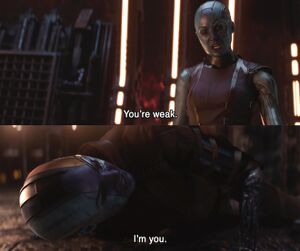 As of August 2019, the future of Marvel Comics' Avengers cinematic universe was uncertain because of business disagreements between Sony and Marvel Studios.

What this means for movie fans is that they may not see too many Spider-Man storylines in future Avengers films, but this is not something that will affect memes based on this successful franchise.

Nebula is a female mercenary cyborg that spends considerable time and effort battling the alien Skrull Empire. In the Avengers films, she is an emotionally needy child of Thanos who helps Iron Man when he is stranded in space, thus deciding to join the Avengers in defeating Thanos by means of jumping through multiple timelines.

Being raised by Thanos, Nebula does not have a concept of mortality when she jumps through timelines, and when she encounters herself in the past, she dismisses her own being as a weakling, to which her previous "life" reminds that they are the same entity.

It took a few months after the release of "Endgame" for meme-makers to tackle this scene; it happened in mid-August on Reddit, and it made its debut as two-panel object labeling meme.

Even though the original Nebula meme deal with arithmetics, it is clearly a case of "the kettle calling the pot black."

Whenever you have a situation wherein you are criticized for a fault that the accuser clearly exhibits, feel free to use this template. 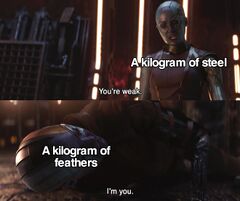 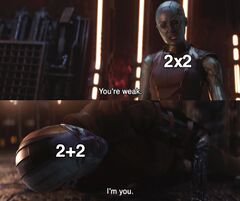 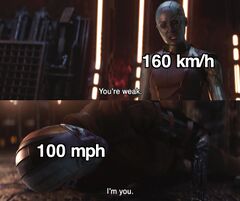 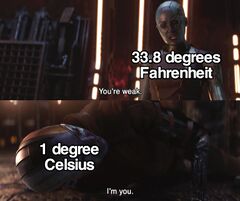