A Grain Of Rice 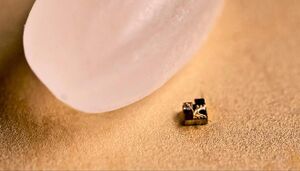 This meme features “A Grain Of Rice” next to the world's smallest supercomputer. The image is zoomed in quite a bit, making the grain of rice appear very large and the computer very small. The rice and computer are both captioned either with an accurate description or some sort of exaggeration based on size.

The photo was taken in 2018 by researchers at the University of Michigan. In 2020, the image quickly went viral on social media sites as users captioned it with various pieces of text. In particular, Reddit submissions accumulated huge numbers of points and greatly helped to share the photo online.

The meme is used to juxtapose something large with something small. A usage might label the grain of rice properly and label the supercomputer as "my bank account" instead.

Alternatively, the rice and supercomputer could be labeled properly, and a tiny pixel in the corner of the image is captioned as something even smaller. When people want to exaggerate the size of something, A Grain Of Rice is one of the first memes they turn to.