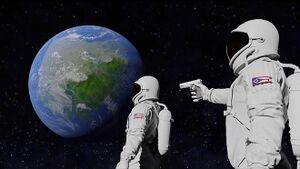 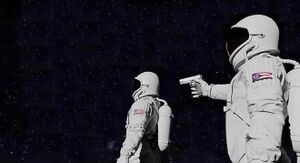 There is a trope in sci-fi, horror, and suspense, that centers on the hero unveiling a conspiracy only to become a victim of it; in other words, the hero's suspicions are proven to be true, but the outcome is tragic.

“Always has been” is a meme that plays on this trope, but it does so within the “Ohio Vs. the World” internet parody series.

Let's start with August 2016, a time when the Tumblr social network had not yet been disastrously acquired by Verizon. A blog consisting of a single Photoshop image showed the digital marquee of a bus stop warning that the State of Ohio faced immediate calamity for no reason at all. The image proved amazingly popular because some people believed it was the clever work of hackers pulling off pranks.

Memes featuring Ohio being on the verge of destruction proliferated over the next few years, which brings us to a 2018 single-panel cartoon of a Russian cosmonaut and an American astronaut looking at Earth from space. In this crude drawing, which was posted to 4Chan in August 2018, the cosmonaut comes to the realization that the world is consumed by the United States: "Wait, it's all America?," to which the American astronaut replies: "Always has been," but at the same time preparing to shoot the cosmonaut with what we can only assume to be a space gun.

In late 2019, the big reveal was that the Earth is all Ohio in a version posted to Facebook and Twitter. By June 2020, the exploitable panel became more sophisticated, but the big reveal punchline remained.

This meme is all about the trope. You suspect something, only to realize you have been right all along, but there will always be someone who does not want the conspiracy to be revealed, no matter how silly it might be.