And That's a Fact 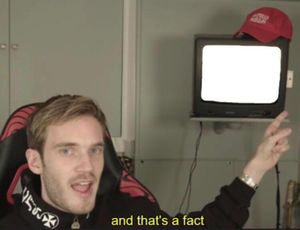 “And That's a Fact” is a meme featured in image macros that show Felix Kjellberg, or PewDiePie, pointing towards a television set. This photo will typically have the phrase, "And That's a Fact" added as a caption on the bottom of the image.

This is similar to the meme Double D's Facts Book and another known as Lisa Simpson's presentation, as they all typically have text edited into the image that represents their own opinion.

This meme seems to originate from a PewDiePie video that received approximately 7.4 million views in four days with the title, Jesus needs your HELP!, Ricegum EXPOSED,FAKE gamer girl 📰PEW NEWS📰, that was uploaded on the 10th of January in 2019. The particular frame that features the phrase and image can be seen at the 10 minutes and 21 seconds mark of the video; This is when PewDiePie makes a gesture towards his television while stating "and that's a fact."

People typically edit the television in this image to feature a popular, or unpopular, opinion that they wish to state as a "fact." Usually the opinion will relate to the social media platform they're posting it on, PewDiePie himself or a popular video game or television series. 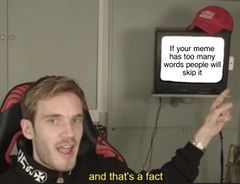 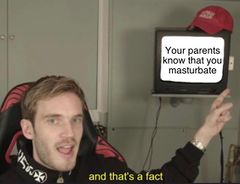 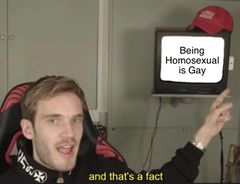 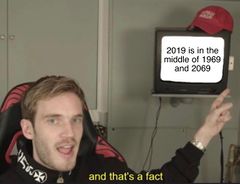