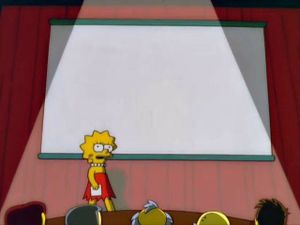 “Lisa Simpson's Presentation” is a highly-customizable meme taken from a still image of a March 11th, 2001 episode of The Simpsons entitled “Bye, Bye, Nerdy.” The image features a determined, narrow-eyed Lisa walking on stage in front of a row of adults. She is in a bright spotlight, and behind her is a large, white projector screen.

The vast majority of memes made from this image are simple “one-offs,” featuring a funny phrase or image on the board and letting the look of determination on Lisa's face (and the attentive-looking audience) sell the joke. Other users photoshop different heads onto Lisa's body in order to have a more visual gag, and / or putting names above the audience to have them sell the punchline.

The original episode, “Bye, Bye, Nerdy,” featured Lisa Simpson giving a presentation on “bullying through time.” It wasn't until May 16, 2018, however, that the still was first used with meme intent by Redditor thomas22howe, who posted the un-modified screen capture to the /4/MemeEconomy subreddit, titling it “Simpsons memes are always a good investment so BUY BUY BUY."

The first to bite was Paralaxien, who posted the image with the phrase “Why Anime was a Mistake” on the screen, followed by several other Redditors in quick succession. The image has since been used for scathing digs at everything from political figures to pop culture to nerd culture, as well as for forms of self-deprecating self-expression.

While the image itself is wholly without meaning, whatever words or images that are put on the screen will quickly determine its worth as a meme. Additional hilarity can be gleaned from the determined expression on Lisa Simpson's face, but – overall – this image is merely the vehicle for a joke that is already written, rather than the joke itself. 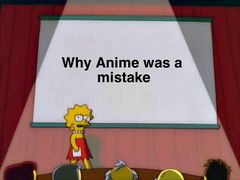 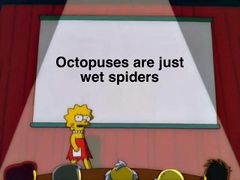 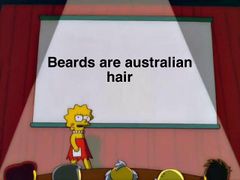