Cheers I'll Drink to That Bro 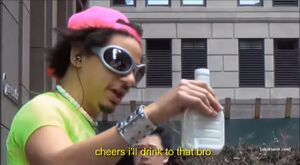 The “Cheers I'll Drink to That Bro” meme is a reaction image of actor/comedian Eric Andre offering a bottle of ranch dressing in a toasting motion. The quote that gives the meme its name is also commonly used as a catchphrase sans image.

The source image is taken from a still of "The Eric Andrew Show," specifically a sketch from the fourth episode of its second season.

The specific sketch in question has Andre walking around a Manhattan park with a bottle of ranch dressing and an eye-catching outfit. The skit involves Andre annoying people within a park by asking absurd questions of them. Eventually, Andre runs into one person, whom he decides to call "Mellow Mike." Andre asks several sexually explicit questions of Mellow Mike before the total stranger asks Andrew "will you just get the [expletive] away from me...leave me alone?" Andre says the words the meme gets its name from and leaves Mike be.

The first time this image caption occurs online seems to be March 29, 2015. Tumblr page "Ranch Me Brotendo" uploaded several stills from the sketch, including the one where “Cheers I'll Drink To That Bro” is uttered.

The image has been used to show support, confirmation or affirmation of whatever image or expression is said at the top of a discussion thread. In short, it is used to encourage and agree. 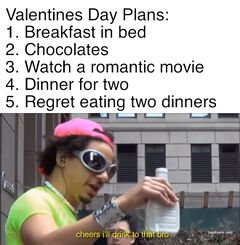 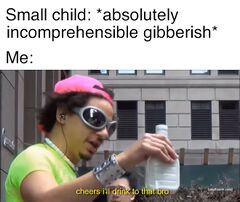 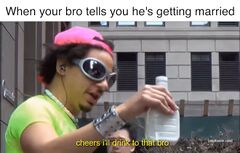 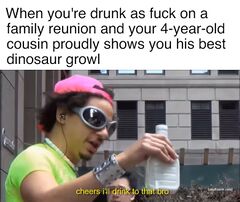