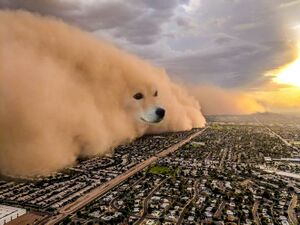 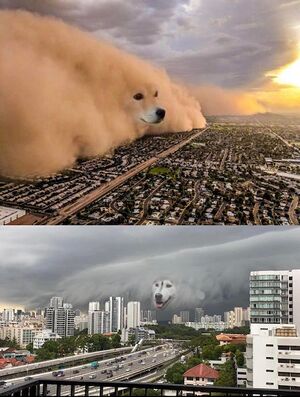 The meme known as “Dust Storm Dog” uses some image editing to place a dog's face over footage of a dust storm, also known as a "haboob," striking Phoenix, Arizona.

August 2nd, 2018 saw Jerry Ferguson upload an aerial photograph he had taken to Twitter. This particular aerial photo entailed a massive sweeping dust storm looming over the capital city of Arizona. Later that day, @chopperguyt, another user of Twitter, tweeted an edit of the image that garnered more than 10,000 likes and 5,000 retweets in less than 24 months.

On August 3rd, ggfergu, a Reddit user, posted @chopperguyt's image to r/pics, where it hit over 5,000 points, 93% upvotes and over 1,000 comments in the same period of time as the initial edit's lifespan.

Come November 4th, 2019, @robinlopvet, of Instagram, shared a derivative take on the image that added a dog's face to the storm. At 710 lies in five months, this version, known as "haboob doggo" or the "dust storm dog" meme, was born.

This particular meme is commonly used to express any sort of overwhelmingly powerful, massive or otherwise unassailable force. This image is often accompanied with text to give some sort of context to the force. Provided below are several examples of proper usage. 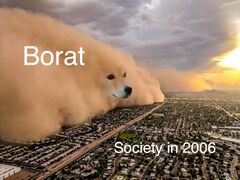 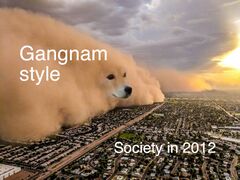 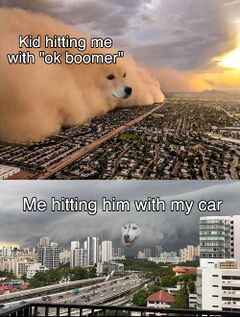 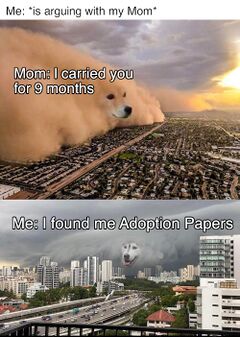