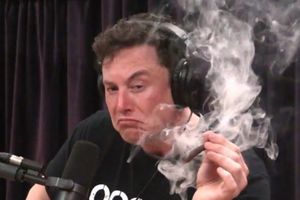 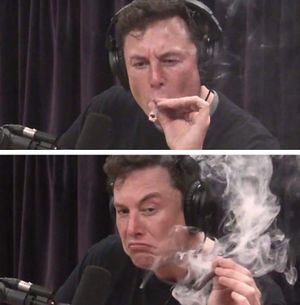 Multi-mogul Elon Musk is known for his innovative technical entrepreneurship including being the co-founder of PayPal and face of Tesla, Inc. One of Musk's most recent project is the SpaceX experience, a tentative business with advancements in rockets so people can tour through space.

Musk also made meme history in September 2018 after he was featured smoking a joint with Joe Rogan on the comedian's podcast, the Joe Rogan Experience. The “Elon Musk Smoking Weed” meme was born when visitors to Reddit and Twitter began photo-shopping hilarious viral content with the iconic image.

After Musk appeared on the podcast on September 6th, 2018, the internet began creating memes on the next day. Viewers captured a hilarious still of Musk mid-smoke with a pondering look on his face to 'shop with text and images.

Reddit user TheJacobus posted a two-line meme joking about Musk launching his car into space after "hitting a blunt." Reddit's scoring system gave TheJacobus a 91% upvote (approval rating) and 520 comments on the sub-Reddit r/dankmemes. The post was titled "Ayylon Muskao."

Many Photoshop memes followed, the most popular varieties being Musk smoking weed in a Tesla or jabs at his SpaceX project. Instagram artists painted the image and Musk's face was featured on t-shirts and posters.

While Musk is a hit with millennials, this joke was born out of the sheer hilarity of a businessman smoking weed on camera. With Musk's fortune and booming businesses, it's easy to poke fun at his smug expression online.

However, Musk might not be laughing at the joke. Following the podcast, NASA reported they will be researching more into the SpaceX program before its launch. Yet, this billionaire remains hopeful the controversy won't follow him up to Mars. 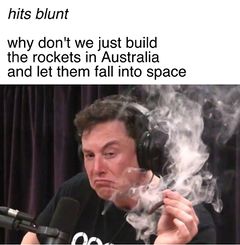 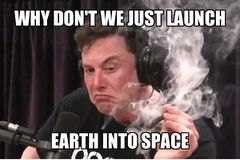 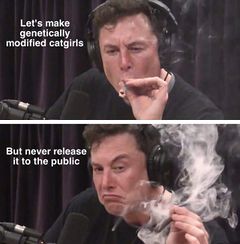 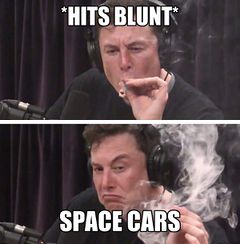