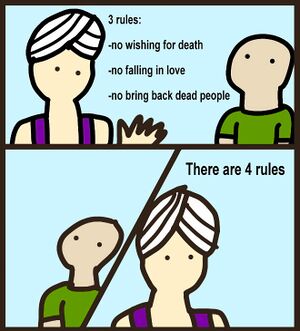 “Genie Rules” refers to a series of memes centered around how a genie might respond to a person’s wishes. It is based on the mythology and pop culture tropes about being limited to three wishes and how wishes may have unwanted consequences. In this case, the genie states that there are 3 rules attached to wishes that it may grant.

The title “Genie Rules” applies to a template which has seen consistent use since 2019. It is a three panel webcomic which generally depicts the genie’s disapproval. Therefore, it’s long form name is “There Are Four Rules”. It is not to be confused with a similar template which is generally referred to as “Good Wish Bro”, in which the genie typically expresses approval rather than disapproval.

It is not believed to be connected in any way to earlier memes about the genie from Disney’s Aladdin or any other previous media pertaining to genies. However, it is possibly an influence as the genie offers the same three conditions for wishes as in the movie. The film has had a substantial impact on common conceptions of genies which deviates from the mythological and religious interpretations.

This template is believed to have been influenced by “Good Wish Bro” and it emerged roughly one year after. Its creator is unknown but some credit the first popular sighting to be in a Reddit post from dankbob_memepants_ on r/MemeEconomy on May 6, 2018. This post is a buy call, and it proved to be correct in predicting the meme’s popularity and versatility.

While this meme does not predate “Good Wish Bro”, it eclipses it in popularity. Roughly three times as many instances of this meme exist than the other. However, most of these exist in niche spaces, especially pages pertaining to gaming. Like its apparent predecessor, much of its spread is due to engagement with Reddit posts. As time went on, the meme began to see attention on Instagram and various gaming forums. Many of the latter produced memes depicting the wisher as characters or as people they knew.

A genie typically offers the person who frees him three wishes, which are limited by three rules. In this case, the genie is either stumped or disgusted by the person’s request, and thus states that there are four rules. The fourth rule is whatever negates the offending request.

While most uses of this template are not so deep, this meme can be used to explore moral and philosophical problems. It can be used to expose some of the depravities one might find online, or simply as an opportunity to let out some shock humor. It is also often used to point out some of the paradoxes in the genie scenario. For example, can a person wish for there to be zero rules? The meme is usually about a person or character trying to do the impossible. It has even been used as a relatable. Like most memes, this template can be made about nearly anything with some creativity. It is a versatile template with many possible meanings. 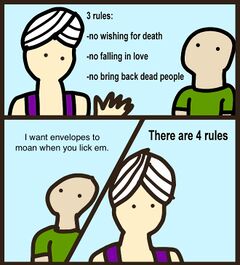 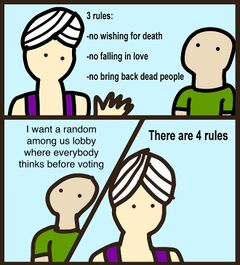 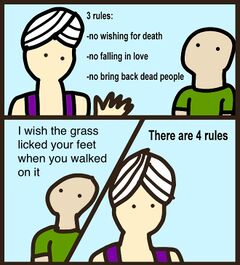 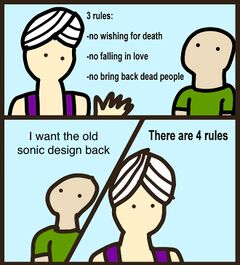