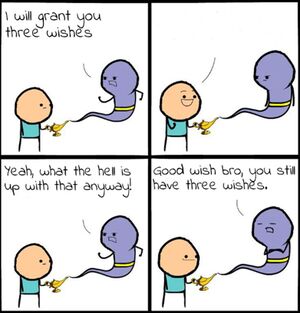 “Good Wish Bro” refers to a series of memes centered around how a genie might respond to a person’s wishes. It is based on the mythology and pop culture tropes about genies. In this case, at least in the default template, the genie agrees with the wisher and grants them an additional wish. It’s almost as if the Genie wished he had the idea first.

The title “Good Wish Bro” applies to a template which has seen consistent use since 2018. It is a four panel webcomic which generally depicts the genie’s approval. It is not to be confused with a similar template which is generally referred to as “Genie Rules”, in which the genie typically expresses disapproval. The genie of the Good Wish Bro template gives the wisher an extra wish rather than an extra constraint in response to hearing the wish.

This template is based on a Cyanide and Happiness webcomic. Its original form was modified from the original and is believed to have been a six panel format at the time of its origin. While genies are a recurring theme in Cyanide and Happiness and some memes have featured other genie appearances, the source image that makes the template seems to have quickly won out. These original examples also dealt with the issue of world peace as an impossible and idealistic wish. It emerged on Reddit and soon after Imgur in May of 2018.

Though it predates “Genie Rules” and is considered its predecessor, this template did not gain quite as much popularity. Roughly a third as many instances of this meme exist than the other. Both owe their initial spread to the popularity of Reddit posts.

A genie typically offers the person who frees him three wishes. In this case, the genie is in agreement with the wisher and treats it as a freebie. The default use of this template is therefore to agree with an idea or statement.

While most uses of this template are not so deep, this meme can be used to explore moral and philosophical problems. Lofty wishes such as world peace are treated as folly or as the alternative to something even more ridiculous and unattainable. It is also often used to point out some of the paradoxes in the genie scenario. For example, can a person wish more wishes or none?

Like most memes, this template can be made about nearly anything with some creativity. It is a versatile template with many possible meanings. Despite some of the heavy questions it evokes, this meme is most commonly used as a relatable for day to day moments. 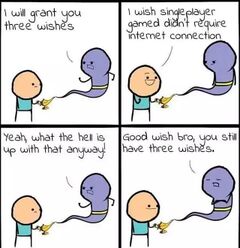 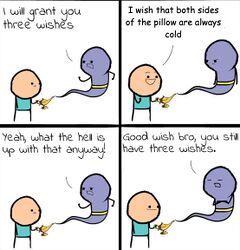 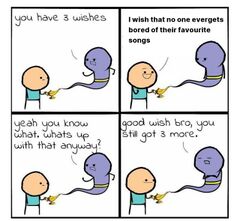 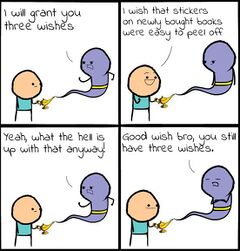