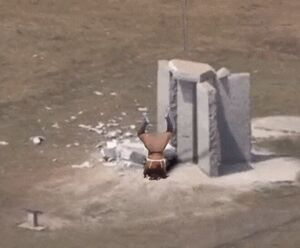 On July 6, 2022, the “Georgia Guidestones” were attacked with an explosive device and later dismantled for safety reasons. In the days following, the internet exploded with discussion and memes about the incident. It had long been a popular topic in conspiracy theory circles. Many internet users believed it was associated with the cabal of globalist elites and celebrated the incident. It has been remixed with other current events and with classic meme templates such as Disaster Girl. Rumors spread that a secret time capsule was underneath the Guidestones, but no evidence of such a thing was found on the site, at least according to official reports.

The Georgia Guidestones were a mysterious monument in Elbert County, Georgia. Its construction was paid for by a man using a pseudonym Robert. C. Christian and representing an organization with little known history and a lot of money. They had been planning to build his monument for many years in advance and the project was completed in 1980.

It was an arrangement of four tablets around a central tablet, all supporting a stone on the top. Some have called it an American Stonehenge. Indeed, Stonehenge was part of the inspiration for this monument. The stone slabs were inscribed with the blueprint of government for a new society in a new age of reason. The text was written in a variety of world languages with the aim of being available to people from all parts of the world.

Naturally, this strange site has been a focus of conspiracy theories. Some say that the stones are Masonic in origin. Many have connected them to a conspiracy of a New World Order in which individuals are property of the one-world government. Other memes about this idea: You will eat the bugs, you will own nothing and you will be happy. Conspiracy enthusiasts have given the world endless content speculating what the meaning of the 10 principles on the slabs could be. The first seems to be the most hotly discussed, since it alludes to theories about population control.

Surveillance footage of the bombing incident released on Twitter by the Georgia Bureau of Investigation was the first piece of media to spark the internet meme machine. In the coming days, it could not be avoided on social media. It was also popular on 4chan, where users added some of their favorite characters into the scene.

Despite the incident being well documented, there is still no suspect or motive for the attack. This is strange because so many people want it destroyed. It has been a persistent subject for years and many people have called for it in the past. Recently and notably this had included a video of a visit from Kandiss Taylor, a former candidate for Georgia Governor. Left wing pages such as Buzzfeed have tried to connect her to the attack. She apparently believes that God did it. Maybe the memes just write themselves now.

The inscriptions on site referenced a time capsule underneath the monument. Due to everyone’s curiosity, a six foot dig was made under the site after the debris was cleared. No sign of one was found. This did not stop some users from believing and saying otherwise.

Most memes about the Georgia Guidestones give them a negative connotation and paint their destruction in a positive light. People think of them as a satanic monument which celebrates genocide, eugenics, and world domination by the ruling class. If one takes the New World Order interpretation, this may be true. However, there is a lot about the situation that is not known.

Nobody really knows who put it there or what its intentions are. Similarly, nobody knows who wanted it gone or how they achieved it. There is footage of the bomb, but no footage of anyone setting us up the bomb. Could it be that they wanted to clear it? Was it an inside job? Is the conspiracy just beginning? Or does it mean anything at all? There are some who call it nothing more than a roadside attraction. Still, it is hard to say it can be so insignificant if someone went to such measures to get rid of it. It has been vandalized in the past as well. 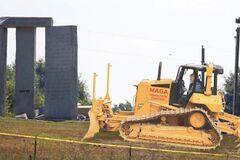