Harry Is Adjusting Great to America 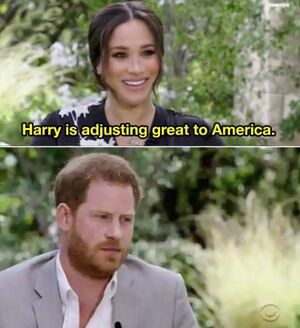 In March 2021, Prince Harry and the Duchess of Sussex sat down to an interview with American media queen Oprah Winfrey, and the world was treated to shocking revelations about the dysfunctional British Royal Family and the cast of miscreants that surround them.

The interview was shocking and sorrowful, particularly when we take into consideration the background of Prince Harry growing up with the scandalous demise of his mother, the late Princess Diana.

All the same, the interview was meme-worthy, and this is why we have “Harry Is Adjusting Great to America,” a two-panel image macro that puts a lighthearted context to the ugliness of the revelations about racism and other royal nonsense.

On March 9, shortly after the interview aired, various image macros were posted to Reddit; the top panel is a screenshot of Meghan Markle and the bottom features her husband.

The first series of memes were variations of culture shock that we imagine Prince Harry may have encountered when he decided to split from the Royal Family and move to Los Angeles. In essence, Markle comments on how the Prince is having a swell time getting used to American life; however, her husband makes a statement that clearly indicates this is not the case. Many of the jokes deal with currency, food, driving, strip clubs, and pop culture references.

Over the next couple of days, dozens of Reddit members from both sides of the pond posted their own jokes, many of them quite hilarious, and the two-panel images collected thousands upon thousands of positive votes.

The United States and the United Kingdom are quite different. This meme is pretty useful in terms of pointing out obvious and amusing differences, especially when making fun of crass American behaviors. As for when Prince Harry will completely adjust to American life, only time will tell, but we know he is a worldly man who does not suffer fools very easily. 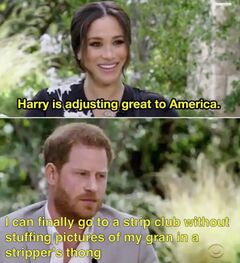 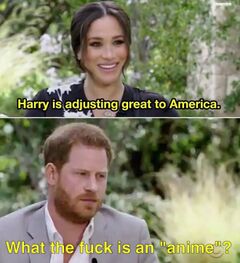 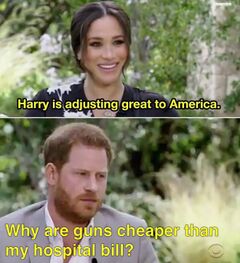 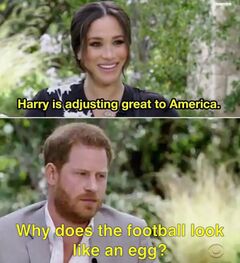