I Can Milk You 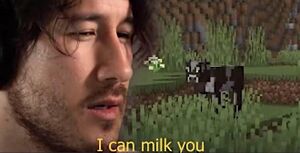 The meme known as “I Can Milk You” is an image macro that depicts the profile YouTube personality Markiplier observing a cow within the game of "Minecraft" and uttering the line. It instantly rose in popularity on social media after Markiplier uploaded a video of him playing Minecraft in May of 2020. This image is often used as a response to something exploitable.

On May 29th, 2020, Markplier uploads a video, continuing a playthrough of Minecraft. Said video racked up over 2.2 million views in two weeks. During this video, he chances upon a cow and quips "I can milk you."

Redditor "TheBrightSword" uploaded a screenshot of that particular scene to r/PewdiepieSubmissions, adding a caption about the relationship between video companies and bestselling titles. This post garnered 7,700 points over the span of two weeks, with a 99% rate of upvoting. 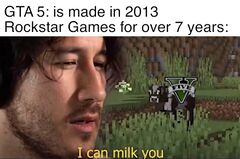 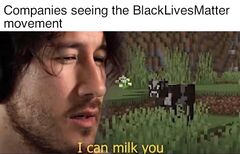 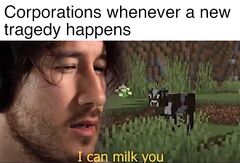 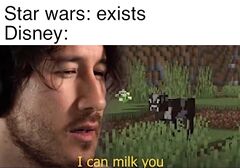