Oh Yeah, It's All Coming Together 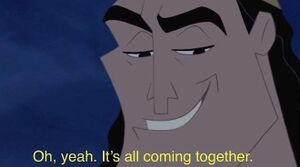 The “Oh Yeah, It's All Coming Together” meme is an image macro that is taken from the smash Disney hit The Emperor's New Groove.

One scene involves Kronk brainstorming out loud ways that he could successfully track Emperor Kuzco, who had dined and dashed, or not paid for a meal he was served at a local restaurant close to where Kronk lives.

At the end of the scene, which included a long monologue from Kronk, the main character says, "Oh yeah, it's all coming together."

Like with many memes, the "Oh Yeah, It's All Coming Together" image macro is used by people to bring light to positive chains of events in their lives or in popular media.

Users also use the image macro ironically, such as when bad things happen, as a means of making others laugh and bringing light to their own struggles. 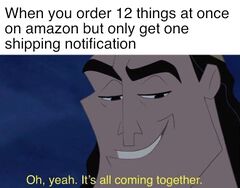 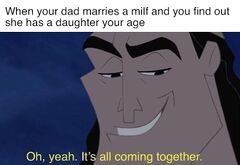 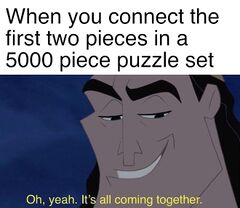 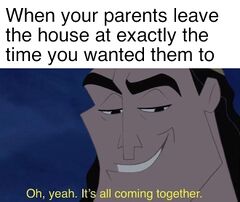