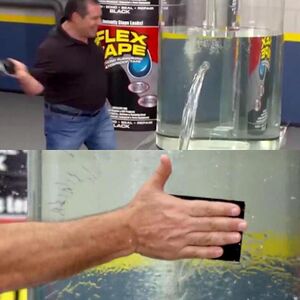 Flex Seal is a brand of super-strong tape that hit the market in early 2011. Initially, Flex Seal was only sold through television advertisements. Prospective customers could log onto the brand's official website or call its toll-free hotline to order Flex Seal products.

As part of its television advertising campaign, which is still ongoing today, spokesperson Phil Swift used Flex Seal to patch up a leak in a large cylinder of water. The leak was substantial, though the Flex Seal was demonstrated to successfully adhere to the side of the water-filled container and stop the leak.

In 2011, a now-infamous - it's still running today, as a matter of fact - television advertising campaign for a super-industrial-strength line of adhesive products, Flex Seal, hit the airwaves.

It's not clear when the demonstration depicted by this meme was first broadcasted as part of Flex Seal's TV ad campaign, though it likely debuted early on in its lifetime.

Are you familiar with the idea - you've probably heard it worded differently - of adhering a Band-Aid to a broken leg?

Adhesive bandages, for one, are too small to even begin to provide the necessary support that a broken leg needs to heal. Second off, Band-Aids are meant to be slapped on cuts and small wounds; in such applications, they serve the dual purposes of promoting the formation of platelets to form a scab and keeping foreign objects out of the wound.

The Phil Swift Slapping on Flex Tape meme is a nod to the aforementioned joke of an idea. People use this meme, in most cases, at least, to refer to laughably-poor fixes to problems that have been suggested to you by others who obviously have no idea how to fix the problem you're experiencing. 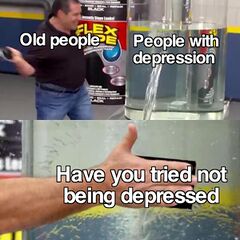 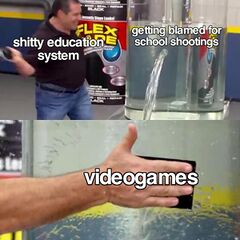 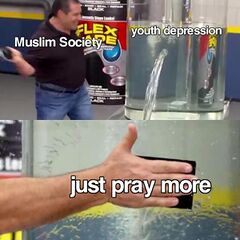 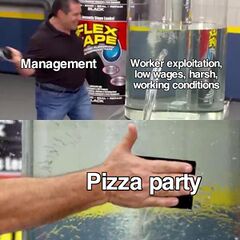