Press A to Mount 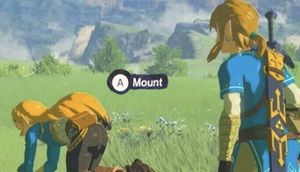 "Press 'A' to Mount" is an image macro meme featuring a screen cap from the game, in which the hero, an hylian named Link, considers an offer from a fairy to climb on her back for a piggyback ride; the player would have to press the "A" button on the Nintendo Switch or Wii U console to perform this action, but there is accidental innuendo that suggests the fairy is enticing Link into having sex.

On the Reddit social network, the "Press 'A' to Mount" meme started trending as an image macro in May 2018, a few months before the game was adopted.

There are a few memes flying around the Zelda Reddit boards, but this one seems to have really caught on because of its funny innuendo.

Thus far, this image macro meme has been used to illustrate reactions to fairly geeky and nerdy situations whereby an individual is surprised to learn that an attractive acquaintance shares his or her interests.

The elation over this discovery is so strong that it elicits sexual desire, thus prompting the offer to mount the interloper or to become the subject of the mounting. 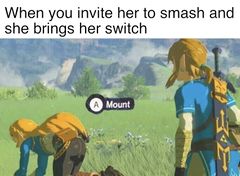 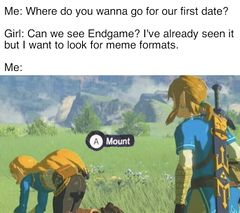 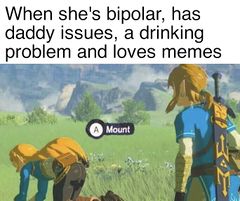 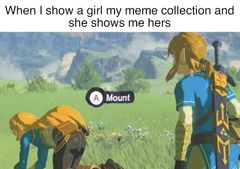