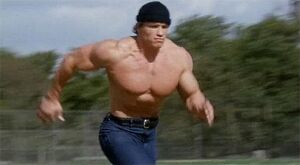 Behavioral researchers who study internet memetics are often astounded by the way a single humorous thought can take off in wildly different directions; such is the case with “Running Arnold Schwarzenegger”, a meme that started off as a joke among bodybuilding and fitness enthusiasts, but which was later used to comment on reading habits, practical jokes at Barnes & Noble, time travel, and gender-based preferences.

The original image is from a scene of the 1970 film "Hercules in New York" starring Schwarzenegger at peak of his bodybuilding career, when he was winning Mr. Olympia titles left and right. The first online posting of the scene, which features Schwarzenegger performing a sprint and long jump at the NYC Central Park, took place on a YouTube channel in 2012.

The earliest image macro conversion with commentary appeared on Instagram in September 2016, and it was used to describe a reaction to seeing your favorite gym machine taken over while you were busy flexing in front of the mirror.

In 2020, the image was posted on Facebook and Twitter as a meme describing what happens after pulling a prank by rearranging books at Barnes & Noble. By July, the image was posted on various Reddit forums with variations on time traveling themes; specifically focusing on the difference between what men and women would do if they had the opportunity to travel back in time.

This message of the meme is simply insofar as depicting how you would react to a situation that requires a very quick exit. Imagine children ringing the doorbell of a neighbor's home and running away to hide so that they can enjoy the confusion when the door opens and no one is there. 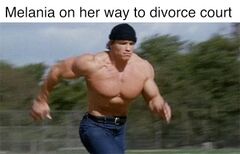 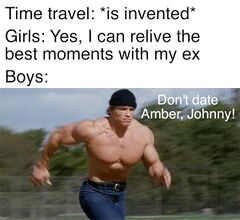 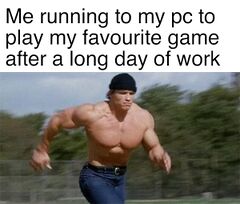 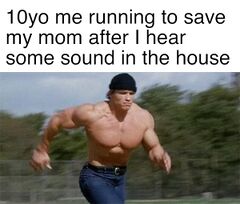