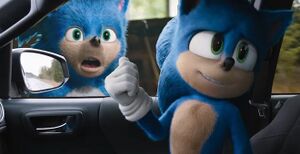 “Sonic Pointing at Window” is a meme that was brought to us by “Sonic the Hedgehog,” a film that hit theaters in 2020. The still image is a screenshot from the movie’s trailer and has been edited to add a comedic touch.

In the trailer, the clip shows Sonic pointing at a drone from the passenger seat of the car. Sonic thinks this modern technology is “cute” and wants to take it home with him. The driver, Tom Wachowski, is thoroughly unamused by Sonic’s comment and continues driving.

The trailer for “Sonic the Hedgehog” was released on Nov. 12, 2019. Within four days, nearly 20 million people had seen the trailer. With that said, it took mere hours for meme enthusiasts to do what they do best.

On the same day, sonicstadium, a Twitter user, uploaded an edited version of the photo that showed Sonic pointing at an outdated design of himself. This was the initial Sonic design and was utterly loathed by the public. The post received over 39,000 likes in four days. Since then, Reddit and Instagram have put their own spin on the meme, but sonicstadium’s post remains the most popular.

The picture is used to underscore a person or thing that’s superior, with the Sonic inside of the car being the higher-ranking character. For instance, Google versus Bing, Reddit versus Instagram, and new Sonic versus old Sonic.