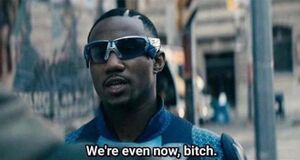 During the coronavirus pandemic of 2020, millions of people were glued to their mobile devices and assorted screens watching digital video streaming services such as Netflix and Amazon Prime Video.

For members of the internet pop culture community, these streaming platforms provide a target-rich environment for exploitable, image macro, and reaction memes; such is the case of “We're Even Now, Bitch,” which comes from the Amazon series "The Boys."

"The Boys" is based on a graphic novel about a group of vigilantes dedicated to fighting corrupt superheroes. The highly anticipated season two of "The Boys" mercifully rolled out in the midst of the pandemic, and its eighth episode featured a scene in which a superhero snitches on one of his peers, the rather unpleasant Stormfront.

The quotable line about making things even was said by A-Train in dramatic fashion, and it was turned into an image macro posted to Reddit on the same night the episode was made available to Amazon subscribers.

The first version of the meme made an allusion to a simple arithmetic concept, but it proved to be very popular among Reddit users. A couple of weeks later, the image macro was posted to Instagram, iFunny, and 9GAG, but the themes switched from math to dubious military decisions, generational gaps, memetics, and canine dynamics.

Whenever you wish to illustrate situations in which the score is even or settle, this meme will resonate because A-Train's conclusion is firm and highly relevant. 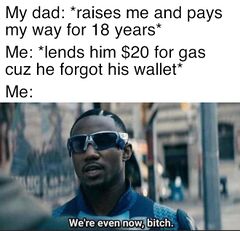 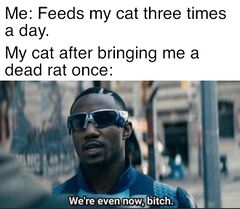