We've got a city to burn 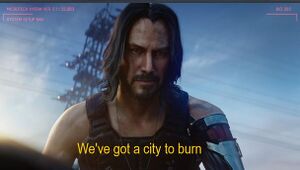 The "We've got a city to burn" meme unites two very popular things for the meme community: CD Project Red, the studio that created the video game series The Witcher, as well as the beloved actor Keanu Reeves.

The image macro is a still from the first trailer to be released for the upcoming game Cyberpunk 2077. In the image, you can see Keanu Reeves, sometimes wearing sunglasses, and the caption is a literal quote from the trailer, "We've got a city to burn", sometimes also proceeded by "Wake up, Samurai."

CD Project Red, the studio that already created the massively popular video game series The Witcher, announced the release date of their newest game called "Cyberpunk 2077" at the E3 on June 9, 2019. One of the main characters in the game will be played by the famous actor Keanu Reeves.

At the end of the trailer that was also released, Keanu's face is revealed as he takes off his sunglasses and says "Wake up, Samurai. We've got a city to burn."

Not even one day later, the meme community had already picked up a screenshot and made a few memes out of it. One of the first ones, posted on by u/voldoman21 on the subreddit r/JohnWick, shows an article on top stating that the capital of Iran banned dogs walking in public and the image macro as a reaction right below.

The meme expresses excessive anger towards one or more persons, often especially towards a city, in accordance with the quote. However, it can also be used to show that you don't like something at all. 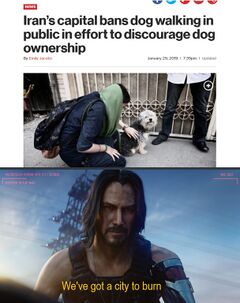 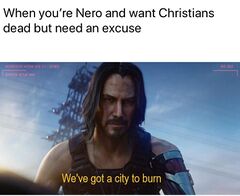 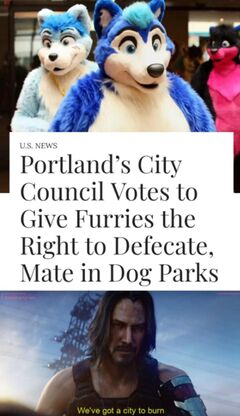 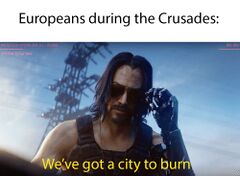