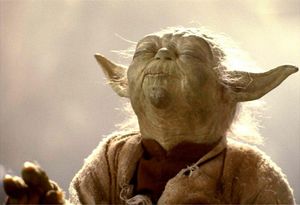 The Yoda smell meme. This comedic depiction is derived from a scene from Star Wars: The empire strikes back. Its a screen shot of the Jedi master as he is using the force to levitate Luke’s space craft.

From a screen shot point of view it looks like Yoda is sniffing the air as if he smells something incredibly delicious or strange. And so multiple memes have cultivated out of this single screen shot from a scene from one of the most popular movies.

Although the scene was the first time we get to see a Jedi master displaying his force power, some juicy content is born to poke fun at the powerful Jedi warrior.

The meme has a few different styles that people use. However they all follow the similarity that Yoda smells something and makes a remark about it or just mentions it.

One of the creators made it seem as if Yoda is enjoying a cool breeze flow over him but smells the scent of weed. Yoda goes on to say how its better to smoke weed in the wind, implying that Yoda seem like a pot smoker. These kinds of style of satire are unique because most use a already funny character.

Not to say Yoda isn’t a funny character but he was not intended to be funny. But people can take a very serious scene that builds very vital story sequence and make fun light of it.

The Yoda smelling is a good interchangeable gag. Sometimes people using it for sports, food and sometimes: Yoda smoking weed. Being able to take a intended serious scene from a movie and flip it to be funny in multiple ways makes a classic laugh. 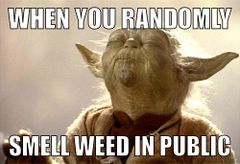 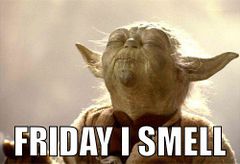 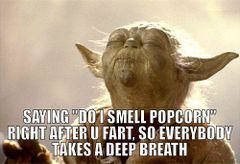 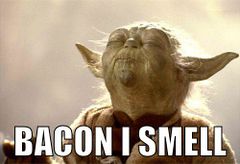