You Better Watch Your Mouth 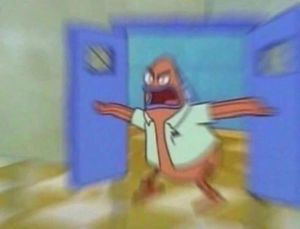 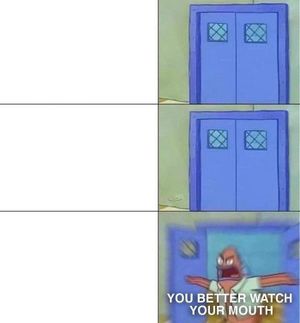 “You Better Watch Your Mouth” is a meme that began in early 2017 to convey strong disagreement. It features a vertical series of screenshots from the animated TV show "SpongeBob SquarePants" paired alongside customized text.

Typically, the first two images each show a closed door paired with an insulting or controversial statement, such as, "You're ugly," or, "You don't have any friends." The third and final statement, which expresses an opinion with which the author of the text disagrees, is paired with an image of an angry fish bursting through the door and shouting, "You better watch your mouth," in capital letters.

Although the screenshots used in "You Better Watch Your Mouth" originated in a 1999 episode of "SpongeBob SquarePants" titled "Mermaidman and Barnacleboy," the meme itself appeared on February 11, 2017, when the Twitter user @narbiesworld tweeted the screenshot of the shouting fish alongside a caption ridiculing people who react to racist comments by making racist statements themselves. The tweet received thousands of likes and retweets, and the Twitter user @cavemanreacts created another version of it a few months later.

A two-panel version of the meme appeared in August 2018 on Reddit, and the three-panel iteration with the text, "You better watch your mouth," showed up on Reddit in February 2019, receiving over 29,000 points in less than a week.

"You Better Watch Your Mouth" draws its humor from the contrast between the author's indifference to the harsh invective of the first two captions, as indicated by the closed door, and the author's anger at the milder third caption, as indicated by the shouting fish. This contrast typically highlights a quirky, niche opinion the author has. Examples of the final caption include, "I'm glad Constantinople fell," and, "Jar Jar isn't a Sith Lord." 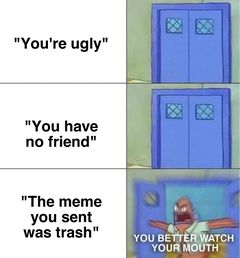 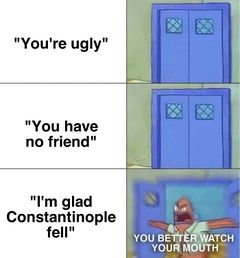 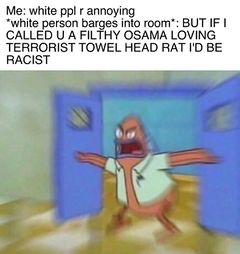