You Just Insulted My Entire Race Of People 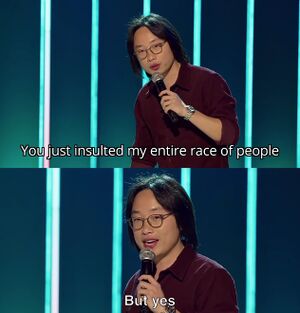 Memes that originate from stand-up comedy routines are not as common as they should be. In the case of “You Just Insulted My Entire Race Of People,” the source is a 2020 comedy special featuring Jimmy O. Yang, a hilarious Asian-American comedian whose repertoire includes many personal experiences about the dichotomy of growing up in the United States as part of a traditional Cantonese family.

Jimmy O. Yang became a popular comedian following his appearance in the HBO series "Silicon Valley," which ran from 2014 to 2019. One particular joke that resonates with his audiences involved a sexual experience with an American woman who was relieved he did not live up to the bigoted stereotype about Asian men and small genitalia.

Yang felt that this post-coital comment was incredibly offensive; at the same time, however, he took it as a compliment because it dissipated his own anatomical insecurities. The first two-panel image macro from this scene appeared as a Reddit post on April 19 2021, but the ethnic stereotype was related to meatballs and a popular YouTube personality.

After thousands of positive votes, other Reddit users posted their own versions and reactions to clueless comments base on misguided stereotypes such as Minecraft players and gun-loving Americans.

You know how sometimes stereotypes contain a funny inkling of truth? One that you can actually feel good about? This is when this meme comes in handy. 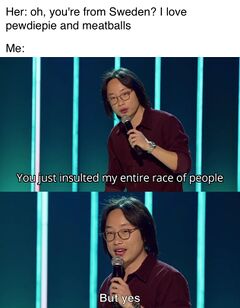 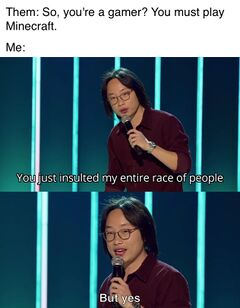 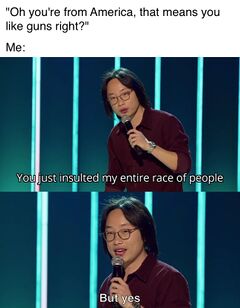 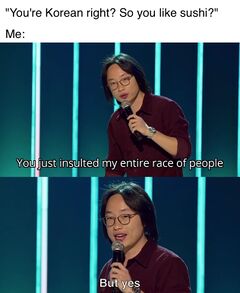