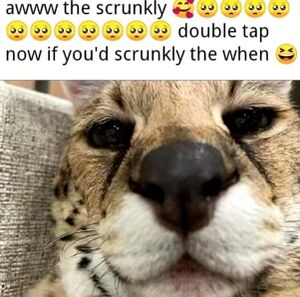 “Awww the scrunkly” refers to a series of memes featuring the same caption over different images, usually of a cute animal or something meant to ironically take the place of a cute animal. In some versions, the expectation of something cute is inverted with something scary or a random gaming or pop culture reference. It is a nonsense phrase designed to evoke LOL random humor. In the original image and most spinoffs, the very top of the text and emojis are cut off and this appears to be done intentionally. This meme is popular with Gen Z.

A TeePublic shop called ZowPig Shirts is selling tees, mugs, and other merch with this slogan.

Many users have tried to define the word “Scrunkly” on Urbandictionary

The meme began on Instagram, where it gained almost immediate viral traction. The first version was created by Instagram user @mr.__vulpes who regularly makes memes featuring foxes. It was posted on May 5, 2021 and its spread continues. 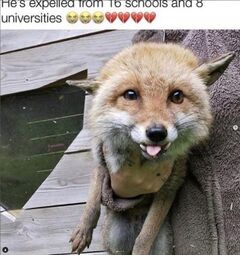 From there, the meme spawned numerous remakes as people wanted to dub the silly caption. YouTube videos emerged of people doing their take of what it should sound like. It was also not long before people started using the same caption on other images.

Big Sogga: One of the most popular early spinoffs was posted to YouTube by user Bakamatsu in June 2021. It features a voiced over version of the caption with a picture of a serval. This is important because serval cats have been dubbed “Sogga” by the internet as part of the lore of Big Floppa. It connected the fans of the original meme with new audiences.

Jinx: Another popular cat from the internet, Jinx has been remixed in aww the scrunkly memes several times. The popularity of this pet celebrity helped get the meme onto more screens and inspired more remixes from broader audiences. This is not the first time Jinx has been memed. Some internet users have dubbed him “Baloongis” and he has his own place in the canon of memes.

Ralsei and the Deltarune Fandom: Aww the scrunkly once again found itself at the intersection of worlds when fans of the game Deltarune began using the caption. The trend is believed to have begun with an image of a plush doll of the character Ralsei. Many spinoffs have emerged pertaining to the Undertale/Deltarune fandom but Ralsei has remained the most prominent character in relation to this meme. 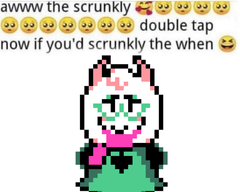 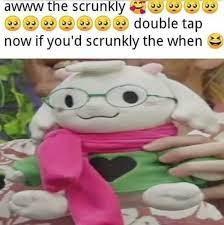 This meme plays on the idea that in language, certain sounds can convey meaning and emotion without forming words. Many English speakers can picture something scrunkly, and many users have noted in comments that certain creatures have a “scrunkly” appearance. Scrunkly appears used both as a noun and as a verb which presumably implies “nuzzle” or “cuddle”.

Beyond this, the meme has little meaning. It can use the expectations of a cute critter to create irony and for the most part it is powered by randomness and the strangeness of the whole concept. Aww the scrunkly has secured a place in the hearts of many diverse internet users. 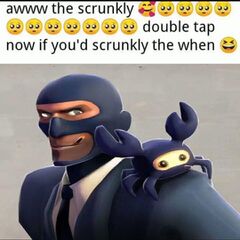 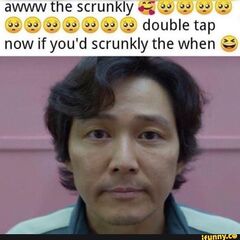 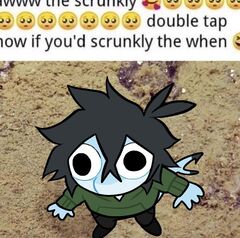 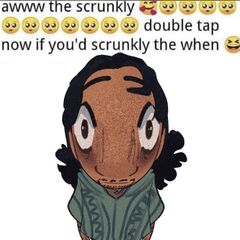 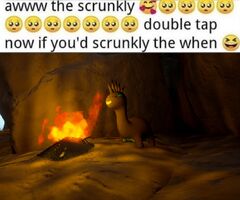 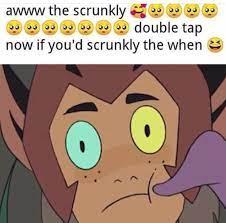 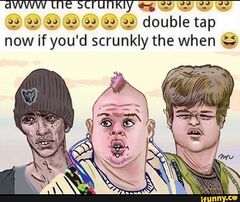 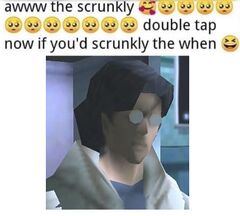 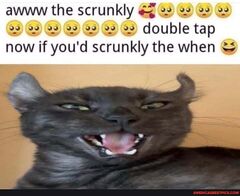