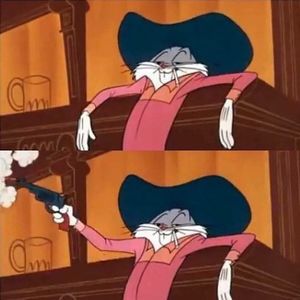 “Bugs Bunny Shooting a Gun” is (typically) a two-panel meme. It features the Looney Toons character Bugs Bunny in a Wild West setting.

"Bugs Bunny Shooting a Gun" originated from the Loony Toons episode "Wild and Wooly Hare", which originally came out in 1959.

It later blew up on Twitter in 2018, after user @poondonkus posted the two-panel image along with the caption "how it feels to mute someone on Twitter after seeing exactly 1 of their posts". In the next few weeks, the meme spread and began to be used in a variety of contexts.

"Bugs Bunny Shooting a Gun" is generally used to imply that the poster has the upper hand in a situation, but is still being casual about it.

It is also used in a hyperbolic fashion to illustrate someone overreacting (to an opposing opinion, for example) while remaining seemingly unperturbed. For example, someone could post this image to suggest that they would casually shoot anyone who disagrees with their thoughts on a trivial topic.

Occasionally "Bugs Bunny Shooting a Gun" is played straight and used in contexts involving the Wild West, for example among players of Red Dead Redemption. The humor of this meme primarily comes from the hyperbole (if present) and the image itself, which draws its humor from the contrast between Bugs Bunny's calm demeanor and his violent actions. 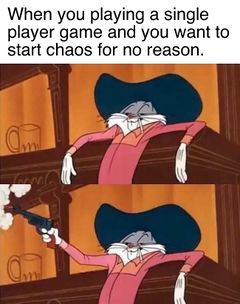 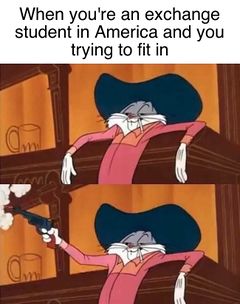 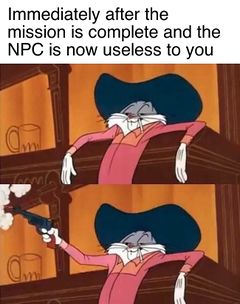 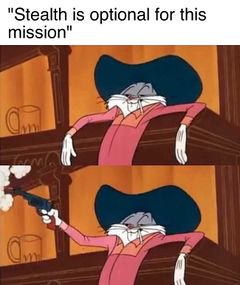