The meme known as “Communist Bugs Bunny,” also known as "We Have Bugs Bunny" is a reaction image that places the Loony Toons character in a red filter, and the symbolic hammer and sickle of the flag belonging to the United Soviet Socialist Republic.

Said image macro is commonly used in tandem with a caption citing ownership over something that the Bugs stand-in claims to be "ours." The meme rose in prominence in June of 2020.

The initial source image was taken from a Merrie Melodies short titled "A Wild Hare," from July of 1940.

The specific scene involves Elmer Fudd hunting for Bugs in his hole. This cartoon is also regarded as Bugs' first scene. When Elmer encounters Bugs at home, 57 seconds into the clip, he makes the pose that has been used for the image macro.

The usage behind this particular meme boils down to countering the claim of ownership made by one person by claiming that it belongs to the group. Examples of this sort of memery include the following. 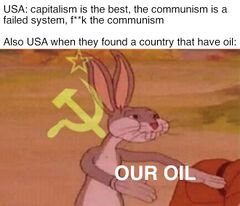 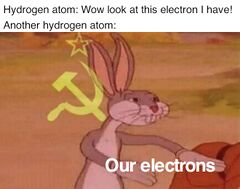 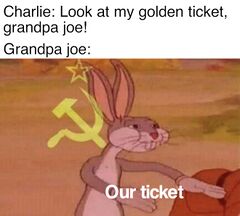 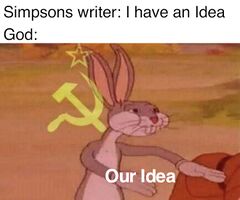