“Say Sike Right Now” is a witty meme that derives from a famed video game.

“Super Mario Maker 2” made its big debut earlier this year. In true 21st century fashion, it didn’t take long for the public to meme-ify it. Twitter user, nira3333, was the first to introduce the meme to social media. The exact tweet consisted of a picture of the blue piranha creeper plant and other theatrics.

In three months, the tweet amassed 490 likes. On July 10, another Twitter user got a little craftier. Twitter-goer, DarkDawg219, created a hybrid of the Say Sike Right Now and Time Traveler Conversation meme. The post garnered significantly more traction than the original poster’s tweet. DarkDawg 219 then shared the meme to Reddit. Since transitioning to this platform, the meme has taken off.

The Say Sike Right Now meme is often used in response to information that is unbelievable.

For instance, when your mom says you’re going to another store after shopping all day or hearing that Japan bombed Pearl Harbor for seemingly no reason. 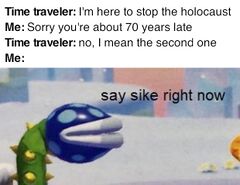 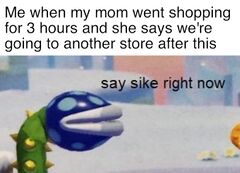 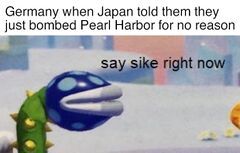 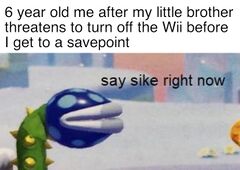