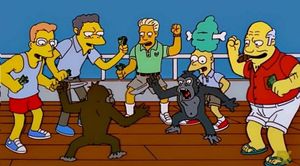 The beloved American sitcom, “The Simpsons,” is responsible for the birth of various memes. One such meme includes the “Simpsons Monkey Knife Fight” scene.

There’s no need to read between the lines, for the clip is exactly as it suggests: monkeys fighting with serrated blades. The scene features a group of presumed gamblers who are betting on the outcome of the duel.

The meme made its debut on January 23, 2000, in an episode entitled “The Mansion Family.” The show’s protagonist, Homer Simpson, is shown spearheading a voyage across international seas. His destination is where the monkey fighting takes places. The clip remained untouched for years until YouTuber djbuddylove3000 put their creative spin on it.

On December 11, 2007, djbuddylove3000 uploaded a heavily edited video about underground monkey knife fighting. The footage played into the ridiculousness of both the scenario depicted and of dramatic documentaries. In 12 years, the video has received 92,000 views.

For instance, Playstation vs. Xbox. Reddit has had an absolute field day with the GIF, using it to underscore absurd political feuds and national rivalries.