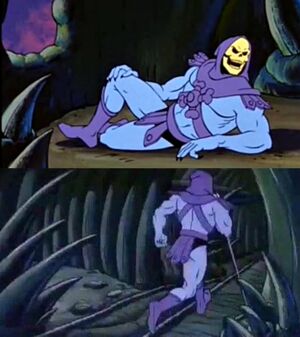 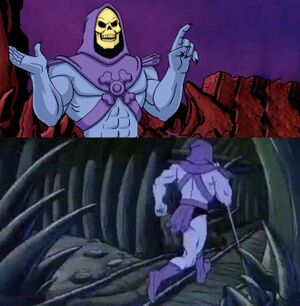 Thanks to digital video technologies such as DVDs and internet streaming, we are seeing more animated television series from the 1980s inspiring new memes.

Such is the case with “Skeletor Facts,” an image macro based on the old Saturday morning cartoon "He-Man and the Masters of the Universe," which was as bizarre and campy as it was entertaining to children growing up in the glorious decade of 80s.

He-Man started off in 1981 as a weird Mattel action figure that was heavily marketed through comic books, television series, a live-action film, and various animated movies that have lasted until 2021. Along the way, He-Main became a heroic gay icon, and there have been suggestions of a homoerotic dynamic between him and Skeletor, his weird humanoid nemesis.

It is unclear where the two panels of this exploitable image macro come from, but they depict Skeletor doling out useless entertaining facts on the top panel before running away into a dark tunnel at the bottom. The first instance of this meme was posted on a Reddit forum dedicated to dubious life advice in mid-July 2021, and it gained thousands of positive reactions in just a few weeks.

A few days later, the image macro appeared on various Reddit forums and the LOLPics website along with even more hilarious and completely useless facts, which are usually related to human sexuality.

Skeletor doling out useless facts before dashing off is pretty hilarious. There is no real meaning to this image macro other than the futility of the knowledge that Skeletor relishes on delivering to his fans. 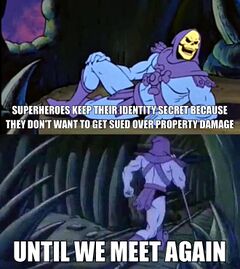 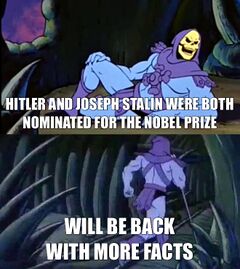 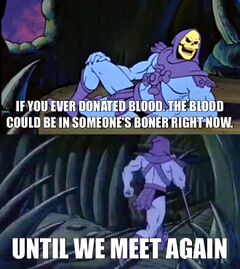 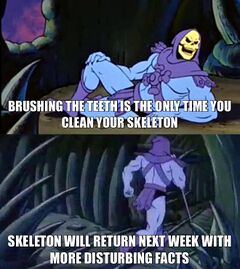