King Penguin's «Do You Yield?» 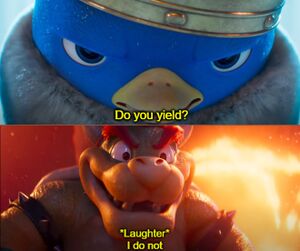 This particular meme is derived from a catchphrase spoken by Khary Payton's "King Penguin" to Jack Black's "Koopa King Bowser" from the debut trailer for 2023's "Super Mario Brothers Movie."

In early October 2022, image macros focusing on this scene proliferated across the internet, especially on the platform Reddit. The most common version of this image macro features two panels, one focusing on King Penguin with text asking the eponymous question and the other depicts King Bowser responding "I do not."

On October 6, 2022, the initial teaser for Illumination's Mario film was broadcast online. At one point in the presentation, a penguin army is doing its best to rout Bowser and his minions with nothing but ice and snowballs. The penguins' king soon asks Bowser "Do you yield?" and Bowser responds with a laugh, a firm "I do not" and then uses his fire breath upon the penguins' castle.

That same day, Redittor Ghimzzo posted a two-panel image format inspired by the exchange that garnered over 2,000 votes by the end of October 6th.

This meme is about being presented with various troubles and frustrations that ultimately prove pointless to place before the person on a mission. After all, the inspiration comes from a giant, fire-breathing turtle-ox-creature balking at his conquest being stopped by a glorified snowball fight carried out by a kingdom of small, blue, anthropomorphic penguins. 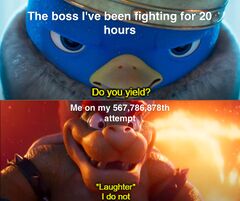 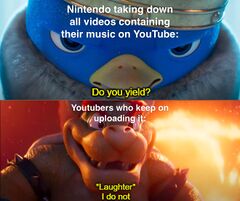 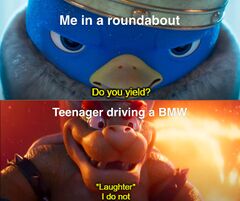 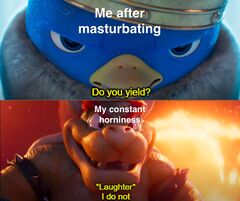