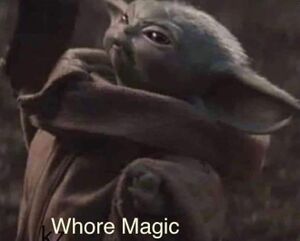 There are no shortage of memes based on the Star Wars fictional universe. The advent of the Disney+ digital video streaming service and new content that takes place within the expanded universe of Star Wars means that we are bound to see even more memes based on this intellectual property.

“Whore Magic”, an image macro based on the series "The Mandalorian," is an example of this trend.

“Whore Magic” is a single-panel image featuring the character known as The Child or Grogu, who is colloquially known as "Baby Yoda." In this image macro, The Child looks surprised and angry.

The first appearance of the image was posted to iFunny.co, a repository of Internet jokes, in February 2020. The caption at the time referenced the reaction a man would experience after watching a stripper climbing the pole after taking eight shots of tequila.

Fast-forward to July 2020 on the Reddit boards, where the image gained the Whore Magic label. By October, other versions emerged with labels describing situations whereby male members reacted to their girlfriends making enough money after just two days on OnlyFans.com to buy a Sony PlayStation 5.

We all know that young and attractive women can leverage their sex appeal to amazing levels. If you are mystified by this unchanging aspect of human nature, this meme will let you express what everyone knows. Beware, however, that there is an ugly tinge of misogyny surrounding this reaction. 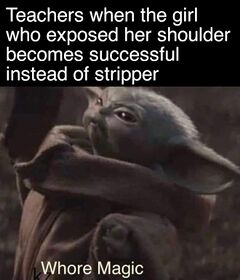 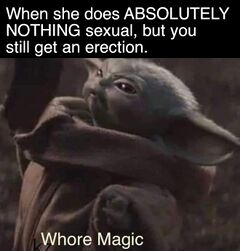 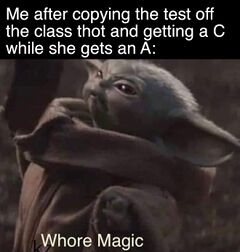 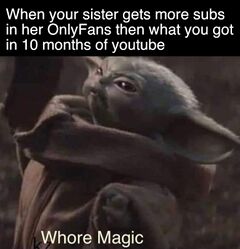